Thanks to a combination of real life and inherent slacker tendencies interfering with writing about racing, I’ve neglected my personal musings about the sport I love.  For my three fans, I apologize and will strive to feed you more of my BS more often. For my anti-fans, I apologize, as you’ll likely be seeing more of my BS.

So let’s talk about the past two IndyCar races at Pocono and Iowa and look at the upcoming Toronto race! With the compact schedule for the Verizon IndyCar Series, the races come hard and heavy. The NASCAR teams are used to this sort of grind, but it has to be new to open wheel teams, and I’m certain that mistakes will be made where fatigue will be a factor. Watch for teams to make uncharacteristic mistakes late in the season.

So this is going to be a compact recap of the past two races and an equally brief preview of Toronto coming up this weekend. With the theme of what can only be described as “bigger is better”! That means a longer post about double points for the 500-miler at Pocono and 50 more laps at Iowa Speedway.

While the lead of the race was mostly occupied by Tony Kanaan in his Target-Ganassi ride, Penske Drivers really dominated the weekend, with Montoya and Power locking out the front row. The race started with a long green flag run of 159 laps. Graham spun and tagged a wall to bring out the only caution period.  Until that point, TK was out front, but never pulling away. Montoya, Power and Castroneves were content to ride in a train behind the Ganassi engine up front, stretching their fuel mileage. 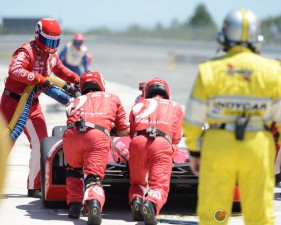 The fuel mileage came to play when the 10 team decided to bank on more cautions and push for a 35 lap fuel run. Needless to say, that didn’t work and left Kanaan mired back in the pack, sometimes turning laps below 200mph to try to make a fuel target. At those speeds, he was a danger to everyone else on track who were actually racing.

The big pass came with three laps to go. Juan juked to get around his team mate and barely clipped his front wing on the rear protective pod, shearing off the end plate. With a damaged front wing and a heavy right foot, Juan made it work and drove to the checkers, taking his first Verizon IndyCar Series win. This was also the fastest 500 mile race in IndyCar history, with the average speed being 202.402mph.

In a battle behind the leader, Will Power showed his true colors again and pulled a very blatant block on his teammate on the front stretch. In the post-race interview, he started to get defensive about his actions, but stopped talking when he looked at the video. There isn’t much he can say after that, really.  He did utilize the Penske speed and a healthy dose of red mist to drag himself back into the top ten to salvage points. 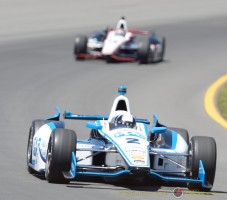 Speaking of points, after Pocono, the points lead was tied between Power and Castroneves, setting up a tight points race going into Iowa. The 2014 rookie class did a phenomenal job at the tricky triangle, with Carlos Munoz finishing on the podium. One rookie of note, Jack Hawksworth, spun in practice and suffered a myocardial contusion (a bruise on his heart) from a brutal 100G impact. He sat out the Pocono race, but was cleared to race in Iowa.

Mother nature dominated the Iowa festivities early. Working with (or in spite of) the sketchy weather, Target Chip Ganassi owned qualifying (no meaningless heat races this year), locking out the front row with Scott Dixon and Tony Kanaan. Rain caused havoc with practice sessions and an approaching rainstorm had IndyCar starting the race early, with the command given by the head of the Iowa Corn Board who really needs the honorary title of Kernel. The approaching rain came and brought a red flag on lap 39. Fortunately, it was short-lived and passed quickly.

The Ganassi A-squad of Kanaan and Dixon stayed at the point all race long, with TK leading 247 of 300 laps. It appears that whatever woes plagued the team early in the season have been resolved, at least as far as speed is concerned. Granted, Iowa isn’t so much about raw speed as it is handling, so I’m sure the Ganassi boys can setup a chassis. Kanaan proved at Pocono that their cars can go fast, which they haven’t done all season. Perhaps this means we’ll see the red cars closer to the front of the field the rest of the season.

A late caution caused by an incident involving Ed Carpenter chopping Juan Pablo Montoya set up a ten lap shootout. The Ganassi crew made the wrong call for the second week in a row by staying out on older tires. Ryan Hunter-Reay and Josef Newgarden took fresh rubber and sliced through the field to claim the top two spots. TK managed to hang on for the bottom step of the podium.

After Iowa, the points race is even closer, albeit the front end isn’t tied any more. Helio leads Ryan by a scant 9 points, with 66 points separating the top five. Penske owns the points race with Castroneves leading, Power in third and Montoya in fifth. Castroneves in second and Pagenaud in fourth make up the rest of the points leaders.

Toronto is a doubleheader weekend on a street circuit. That means tighter, narrower corners, making passing difficult. In order to gain positions, drivers have to be aggressive, which leads to torn up race cars. Saturday’s Race 1 will have a standing start, which adds one more opportunity for drivers to suffer big hits in points. If a front-runner meets catastrophe early in Race 1, it will put the entire team behind for both races, leading to a huge drop in the standings.

The two Toronto races are a perfect opportunity for a driver who can be smartly aggressive to contend for a victory. Andretti, Sato and Bourdais are the three I’m thinking of, but I’m sure every driver will be trying to shove their nose on the inside as often as they can. Will Power, especially, needs to keep his head on straight. He’s in solidly in the title hunt, but he keeps making stupid moves like his block on Helio in Pocono. If he can keep from being a bonehead for the rest of the season, he should stay in the thick of it.  Can he do it?

Since I’m stuck on-call this weekend, I’ll be live-tweeting as I watch both races. If you pay attention, I might tweet something funny or insightful. Better yet, I might just make an ass of myself. Whatever happens, I invite you to crank up your Twitter machine and follow me on Twitter @JohnTheRaceFan.