After my soggy trip to the United States Grand Prix (write-up forthcoming), I’m taking a sick day.  It’s legitimate, as I was fighting a sinus infection going into the weekend.  Slogging around in cold rain and wind didn’t help, I’m sure.

So what happens on my sick day? Verizon IndyCar Series announces their 2016 schedule! About friggin’ time! Although, I think they did it for Robin Miller’s birthday, which happens to be today.  (Happy birthday, fellow curmudgeon!)

I can’t say I’m a fan of doing the schedule announcement in video form, although hearing Paul Page adds a level of comfort.  In case you can’t (or won’t) watch the video, here’s the schedule in a more convenient JPG: 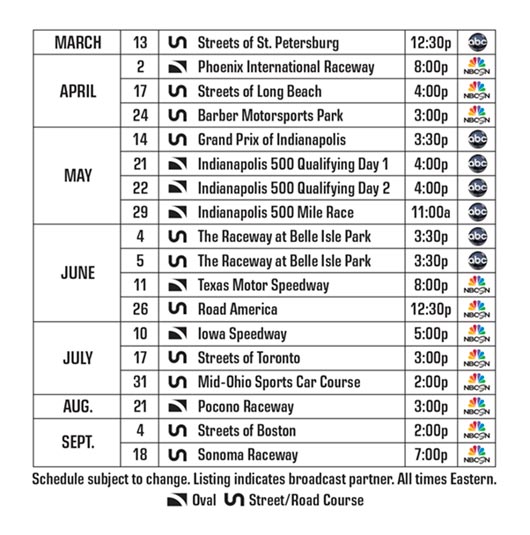 The schedule is not as long as most of us would like, but it’s not as bad as the past couple years have been. The supposed plan is to inject more races at the front of the schedule, starting it in February. Both Walker and Miles have talked about races abroad, but none have materialized thus far.  We shall see.

Here are my thoughts about some specific races:

Phoenix – Yay! A one mile oval is perfect for VICS, and the date in early April should provide weather that’s not oppressively hot.

Belle Isle – I think the “Dual in Detroit” is here to say.  Blame Roger Penske.  Fortunately, it’s the only doubleheader left.

Road America – Yay! This is the race I’m most looking forward to in ’16.

Toronto – For a street circuit, Toronto is one of the better ones.  It’s still a street race, though.

Pocono – I’m surprised Pocono is still on the schedule.  With Wilson’s tragedy and the awkward style of racing, I don’t know how excited I am about Pocono anymore.

Boston – If BCG is the title sponsor, I’ll vomit. The harbor area of Boston is very picturesque.  I don’t know how good the racing will be.  It is a street circuit.

Sonoma – Nothing against Sonoma, but I don’t don’t think it’s the best choice for a season finale.

August must be a tough sell for a VICS race. The only race in August is on the 21st, three weeks after Mid-Ohio. I can understand that, because it’s bloody hot in most parts of the country.  That’s why a race somewhere in the northern part of the country works best.  Maybe someplace like New Hampshire…
Yeah…  That didn’t end well.

The schedule looks to be improving. It’s not where it should be, but we’ll take improvement.  Too bad Robin can’t exchange his birthday present for a larger size.