Editor’s Note: This is the 3rd and final part of Mike Shaw’s (@oregonwings) summary of the recent Oregon Trail Rally. As Shaun mentioned in Part 1, we are very happy to have great contributions and insights from fans like Mr. Shaw. After all, this is exactly what we at OpenPaddock are all about: motorsports commentary for the fans, by the fans! Enjoy Mr. Shaw’s Day 3 summary and be sure to check out the great collection of photos he captured at the rally.

OREGON TRAIL RALLY – DAY 3
This was by far the best day of the rally. I had a motel room nearby and the park expose’ wasn’t until 10AM. That meant I had plenty of time to grab a good breakfast and then walk around a bit. Dufur is a tiny little town with a single gas station, a bed and breakfast / hotel, a general store, a tavern, a salon, and not much else. The city park doubles as a campground and was used for the service park. Those crews that couldn’t fit in the park pulled their cars and service vehicles into a small field adjacent to the park. I walked up to a pair of guys that were hammering on the rear fender of an Impreza. These were the unlucky ones to make contact with the gate in their second run through Starveout the day before and had torn off their bumper in the process. It looked re-attached now…mostly. I simply started conversation with who appeared to be the driver. They talked about what repairs they were trying to make and how the rally had gone so far. I asked about the watered section at the base of the hill, and sure enough the drivers were never told ahead of time, hence the slide into the gate. Members of another team walked up and asked if they needed anything as they hammered away on the body work. An older driver explained that this is what rally is about, everyone sharing to try and get through it. 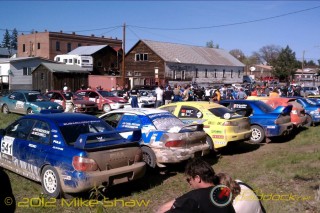 Whether a competitor or not, they all help each other out. Parts will be loaned and payment taken later. If you are stuck in transit or on a stage out of fuel, someone will stop and share theirs without any talk of repayment. He called it Rally Karma. I doubt that happens much in NASCAR.

I walked back into town where they were setting up for the Park Expose’ on Main Street. They blocked off a block and started lining up the cars. It was a really cool contrast to see all these supped up modern cars with their bright liveries parked up next to buildings that were likely constructed in the 1920’s. I sat on a bench as the cars parked and asked one of the locals sitting next to me what they thought of the rally coming to town. They said they simply loved it. It brings a lot of excitement to the community and they loved seeing the license plates showing all the different places the competitors came from. They were surprised and grateful that little Dufur Oregon became such a popular stop for the rally. I figured this would be the best time to actually get a chance to talk to some of the top drivers and co-drivers (and get their autographs too!). I was pleasantly surprised at how easy it was to talk to them. I had purchased a Richard Burns Foundation 10yr anniversary shirt from the UK and asked David Higgins to sign it. He did so happily and told me that Burns was his mentor and taught him quite a lot before his passing. Burns’ co-driver is even the god-father to Higgins’ son, so seeing a fan with such memorabilia in the states appeared to touch him. L’Estage and Richard were there with their Evo again. He said they think they fixed the throttle issue, and was going out on the stages more as a test than anything else. I mentioned the “Never Give Up” tagline on the back of their car this year…very Solberg-esque. Antoine said it was something he lives by, and has been trying to get his kids to follow as a rule as well. Finally, spoke with Crazy Leo and his Co-Driver Carl Williamson. Both of them were very open and talkative, I must have spent 10 minutes in conversation with them. It was awesome! According to Carl, the number one reason why American rally drivers do so poorly at the international level is the lack of proper pace notes. American rally drivers are given pre-made “Jemba” notes, and then are only allowed a single pass slow recce. In all of Europe and Canada, drivers receive a 2 pass recce and make all their own notes. In the case of Leo and Carl, Carl has to convert all the Jemba notes into the format that Leo likes and has to then make adjustments based from the recce on top of that. This usually amounts to the co-driver staying up almost all night to get everything straight. Okay…enough chit-chat the guys had to start getting ready to go and I wanted to make it out to the first stage spectator area “Summit”. Ironically I ended up following Higgins halfway to the spectator area before he peeled off to head towards the stage entrance.

Summit – This one had one of the most spectacular scenic views. The spectator area is on top of a ridge where you can see Mt. Hood, Mt. Saint Helens, and Mt. Adams. Observers have to stand at a fence line and get to see the cars appear coming flat out 6th gear over a crest and then slam on the brakes to yet another set of hay bales making things a little bit more complex for the drivers as they transition a left hairpin at a juncture and then speed off onto another long straight. Standing next to me was an Italian man who was there with his grandson. He now lives in Portland, but had attended a number of rallies in Italy and even the epic Rally Monte Carlo a number of times. 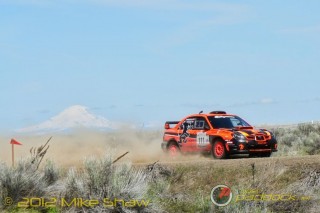 He thought it was sad that American rally isn’t the event spectacular that they are in Europe. He really enjoys rally, but thought it has gone really downhill ever since the end of Group B. Apparently he had forgotten all the people that were killed in Group B. The cars were awesome, but very dangerous at the same time.

Once again some great action as the cars came flying into the spectator area at full speed then hard on the brakes to navigate the hairpin. What was especially exciting was to see a helicopter with a cameraman hanging out the door as Higgins came flying down the stage! I never expected to see helicopter coverage at a Rally America event, yet here it was! SP driver David Sterckx locked up the brakes and had a spin heading into the hairpin and stalled. This caused some drama because his lead over the 2nd place local Hood River driver was not a large amount. He lost a number of seconds getting re-started and reversing to get back in the right direction.

I didn’t remain at Summit very long because I wanted to make sure I got a good spot for the 3rd and final time they ran through Starveout. Again the view was epic. You can see the cars for such a long distance that I even pulled out binoculars to watch when they first appeared over the crest of the steep hill. As usual, Higgins nice and smooth and this time the competitors were ready for the wet stuff. L’Estage unfortunately stalled it at the base of the hill, likely getting used to his first car with a sequential gearbox. No other real drama on this second to last stage, but most of the cars seemed notable faster and more confident in making it through the gate now that they had 2 previous passes behind them. It wasn’t long and the sweep car was already coming through the course. The fans cheered on the support crews as they passed by thanking them for all they do. Then it was back to Dufur for lunch and wait for the podium ceremonies.

They picked a spot in a small field with a distant Mt. Hood as the backdrop. Very picturesque. The leaders arrived and backed their cars in front of an erected banner. Soon the lot was full, music was playing and the champagne showers commenced. There weren’t any changes to the podiums from what was expected at the start of the day, but that didn’t matter. The regional competitors were very happy just to have finished. Making it through this, the longest event on the calendar is tough. Once all the professional photos were taken and the cars moved, the drivers and co-drivers hung around and chatted with fans and each other about the event. Sterckx told me that when he restarted his car after the stall on SS12 it reset back into transit mode and he didn’t realize it till the end of the stage. Verena Mei said she was happy to go slow the first time through the unfamiliar stages and then pick up the pace the next time through. I can understand considering she is in a stock Fiesta with zero upgrades to suspension etc. I shook some hands and gave congratulations, and then it was time to head home. 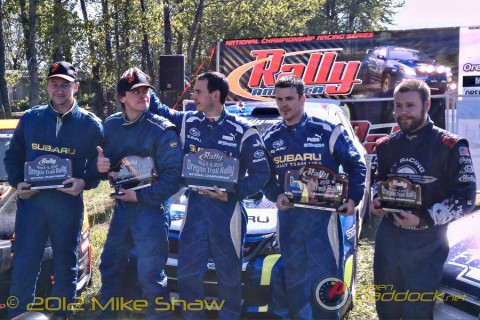 All in all it was an epic event. Totally worth attending all 3 days as each stage in Oregon is so different. I was pleasantly surprised by the openness of the drivers and co-drivers and the level of access to the service parks. There is no need to be intimidated by their popularity. They are easily approachable and are eager to get fans engaged in understanding the sport. Additionally I met many course workers, one of which drove all the way down from Bellingham (about a 6 hour drive) just to volunteer for free! The diversity of the fan base from curious locals that just want to see what it’s about to uber rally geeks like me. I also learned of how close the rally community is. To man winning doesn’t matter in this sport as much as simply finishing. And the methods used to keep going are sometimes very inventive (shoe lace used to replace a broken throttle cable…no joke!). And if you can’t fix it yourself, odds are there will be someone willing to help you out. It’s easy to see why so many grass roots teams get into rally. To put it simply, rally is a team sport in which the entire rally community is the team. I can’t wait till next year, and this time I plan on volunteering and becoming part of the rally community myself.