Or “How I learned to love Le Mans and hate the ACO.”

I have a ritual for watching the 24 Hours of Le Mans. Of course, I watch as much pre-race as I can (usually through a bootleg internet stream) and through the start. My favorite times are the “golden hours” at sunset and sunrise. Watching sunset isn’t much of a challenge, but I usually fail to see the sunrise, as I invariably fall asleep about an hour before sunrise. None of our readers care about my sleep habits.  You want to know about racing excitement, I’m sure. This year’s contest at Circuit de la Sarthe had plenty to spare, most of it in the last few minutes!

Of course the drama started right from the drop of the green flag, which also had a yellow flag with it. For the first time in the 110 year history, the 24 Hours of Le Mans started under a safety car because of the extremely wet conditions due to rainstorms right up until start time. The safety car seemed to go on forever, with the track looking free of any standing water, at least to TV viewers who could find the race.

Yes, finding the race was difficult. We talked about the shuffling of programming around amongst the various channels owned by a network when the Orlando shootings recently pre-empted the Canadian Grand Prix. The NBC over-the-air network was covering the tragedy and the sports programming was moved around accordingly. The same sort of shuffling happened with Le Mans (as has happened before), but there wasn’t any good reason, other than someone felt that the US Open golf tournament was more significant than Le Mans.

Whatever.
That wouldn’t be so bad, except that Fox already chops their coverage up and bounces back and forth between their network properties. To make matters worse, they touted Fox Sports Go as a means to catch all 24 hours of the race, but that was a falsehood, too, as only subscribers with certain access could see the main Fox broadcast on FSGo. I was able to stream it, but Mike Shaw was not. Fox Sucks.

Then, going into the final hours, Fox decided to play network shuffling again! What was scheduled to air on Fox Sports 1 was actually airing on Fox Sports 2, the network most subscribers need to pay extra for or don’t receive it. Again, golf was the choice for FS1.
Fox Sucks, too.

Of course the big story is in the P1 class where the big-buck manufacturers come to play.  Again, Toyota, Audi, and Porsche put their new prototypes out on track, with Audi the odds-on favorite, as usual.  They have the experience winning Le  Mans and a reliability record that is second-to-none. This year, Audi Sport Team Joest didn’t appear to be on their game. They weren’t able to keep pace with the Toyota and Porsche teams all race, and had more than their typical allotment of issues.

Toyota was the big surprise, showing pace and reliability near all race. More importantly, they had better fuel mileage, with both cars able to go one lap longer each fuel run. When each lap is over eight miles, that’s a huge difference, equating to a couple fewer pit stops over the course of 24 hours.

Note that I wrote nearly all race in the prior paragraph. In order to win at Le Mans, you have to be fast, reliable and precise for all twenty-four hours. In the biggest heartbreak ever, the #5 with Kaz Nakajima piloting lost power with about three minutes remaining! They tried to reset the electronics and get it refired, but it was for naught. The best they could do is some spurts of power, presumably from battery regeneration. They weren’t able to complete the final lap to take the checkered flag, ultimately being excluded from the standings. 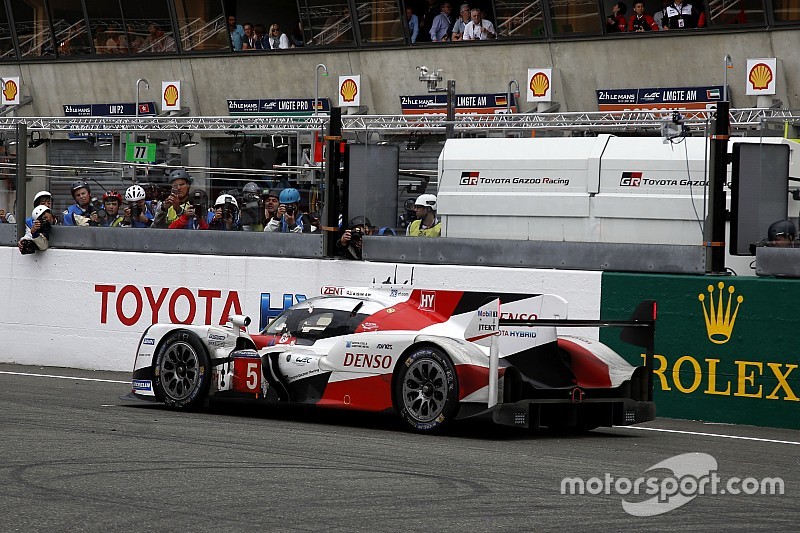 The podium for LMP1:

I’m nonplussed by the LMP2 class, generally. It’s not lacking in talent and there’s variety among chassis manufacturers, at least. I probably should be more interested, considering that LMP2 at Le Mans is the top prototype class in IMSA, as well as other continental sports car series. However, IMSA’s Weathertech United Sports Car Series is dominated by Daytona Prototypes, which do not have a classification for Le Mans.

The only prototype team that runs IMSA is Extreme Speed Motorsport in their pretty black and green Patron-liveried car, but  the car is different for IMSA spec and LeMans spec, so they aren’t really equivalent. I want to cheer for the #30 Ligier-Nissan, but they were mired in the field, along with their team car, #31.

The one bright spot (if you can call it that) was seeing the orange and blue of Manor racing and Graeme Lowdon with a clipboard in the garage. Manor seems to be that scrappy underfunded team that always seems to keep going, despite enormous struggles. Le Mans 2016 was no different, and the shots of Graeme in the garage were numerous, as the car spent too much time under repair to be noteworthy,

The GT classes are usually where the lion’s share of the action comes from, and this year was no different.  With Ford (the first F!) coming back to Le Mans 50 years after their famous 1-2-3 sweep to battle with Ferrari (the other F) once again, their red rival brought out a new GTE car, the 488 Italia. Much like the LMP1 class, LMGTE Pro was a two-manufacturer battle with the two F’s swapping the lead all race long.

Before the race even started, the drama was hot and heavy, with accusations of both teams sandbagging during qualifying. To add fuel to that fire, ACO issued balance of performance adjustments to both teams, adding additional weight to what would be the frontrunners.

It was for naught, though, as the new Ford racer proved its ability to go like hell, invoking recollections of a book by the same name about the Ford/Ferrari feud battle five decades prior. Ford may have been fast, but the new 488 was equally capable, fighting tooth and nail until the bitter end. Ferrari’s fate appeared to be sealed while running second in class during the final fifteen minutes as the ACO handed them a stop & go penalty for the leader lights not functioning. 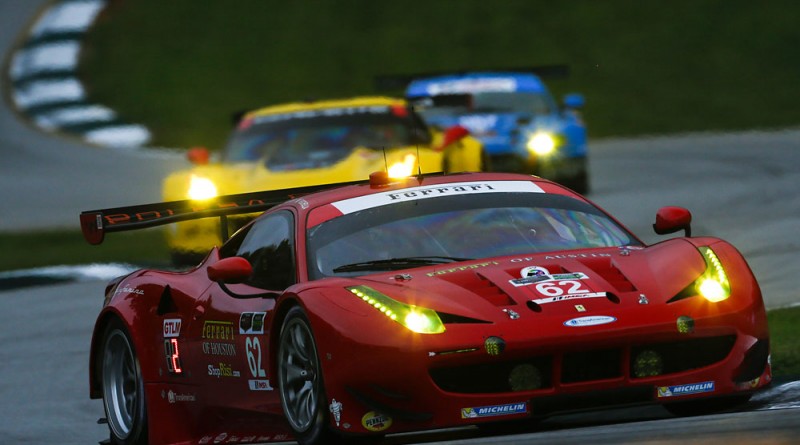 The penalty seemed daft, adding to conspiracy theories that ACO scripted a Ford 1-2-3 finish again. The reality is both teams were protesting the actions of the other.  Ferrari’s fate was in question even during podium ceremonies for other classes while stewards decided their respective fates. The Risi Competiozone team actually stood on the second step of the podium for the trophy presentation, only to have it taken from them as the stewards deliberated.

As it played out, there were protests against Chip Ganassi and the #68 Ford squad, citing the regulation that all teams’ performance must be within 7% of one another, as well as against the Ferrari team. Penalties were handed to both teams, which offset one another and left the finishing order as they ran on track.  It’s really a black eye on the ACO, as the penalty against Risi was inane. I get that there’s a regulation that says those leader indicator lights muyst be functioning, but after 23 hours and change, it’s pretty easy to consider such a failure as “battle damage” and move on.

As a side note, Sebastian Bourdais scored a win at his home track! It’s hard to imagine there being any home-field advantage, considering the international nature of the race. But I’m sure being at home added to his level of comfort and confidence. Ryan Briscoe and Scott Dixon also stood on the LeMans podium (Dixie also garnered fast lap for the class!), with their Ford GT finishing 3rd. Verizon IndyCar Series was well represented, to be sure!

And where were the Corvettes and the Porsche 911 RSRs, those perennial stalwarts of the GTE Pro class? The two factory 911s both retired before halfway, along with one of the C-7R Corvettes. The remaining yellow beast soldiered on to the finish, but not without contact, damage and mechanical problems relegating them to 7th in class.

Porsche.  Ferrari. Porsche. Ferrari.
Thee GTE Am class didn’t have much in the way of variety. You have to scan all the way to 7th place in the class to find another make.

A huge heaping pile of congratulations to Townsend Bell, who was a driver of the class-winning #62 Ferrari 458. He has to be on a huge high, coming off a great run at the Indianapolis 500 and now a class win at Le Mans. Let’s only hope his head will still fit in the booth for the next VICS race on NBCSN at Road America!