That’s right, a plop. We’re talking about the same sound that a turd makes when it lands. That’s not a particularly happy sound, and certainly not something you want to associate with the schedule announcement for a major racing series like the Verizon IndyCar Series. Unfortunately, today’s schedule announcement feels like fans were served up another big steaming pile.

We all knew that 2015 would have another season ending by Labor Day, since everyone at 16th & Georgetown is afraid of NFL football. The belief is that IndyCar will suffer television ratings because everyone in the U.S. is watching football and wouldn’t dare change the channel to watch motorsports. Never mind that the mergified TUSCC aired a 2 hour highlight package from Petit LeMans immediately after an NFL game and drew 1.1 million viewers.

So we have what we have.  But what, exactly, do we have? 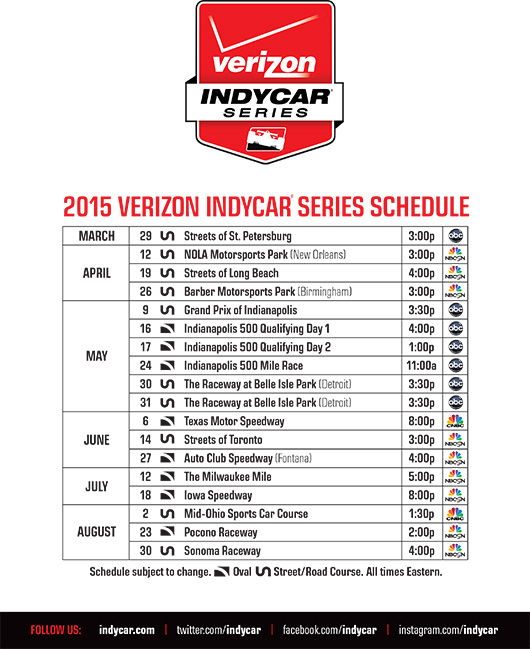 Don’t let 19 rows on the schedule fool you. There are only 17 races and two of those lines are qualifying days for the Indianapolis 500. I’m sure they’re on the schedule because they have TV coverage. I like to think it’s a cost-cutting measure to use last year’s 19-line template for this year’s schedule, too.

The only international race is in Brazil.  I’m guessing the street circuit in Dubai didn’t go over so well, especially at what VICS must have been asking for a sanctioning fee.  Brazil kicks off the season on March 8, then a three week break before St. Petersburg, where we’ll see the debut of the new aero kits.

Brazil and New Orleans are the only new events. New Orleans is a club track that is uninspiring at best, but at least has a date in early April when the heat and humidity won’t be at their peak. Houston is off the schedule with no replacement(s) arranged. Toronto stays on the calendar, but the date is shifted to June 27 to prevent a conflict with the city’s hosting the Pan American games.

I’m glad that Pocono returns, especially with how poorly things went this year, especially behind the scenes. Maybe they’re going to give VICS another chance. Let’s hope they don’t screw up again.

It’s good to see fewer street circuits, since most of them produce lousy racing. St. Pete is an exception to that rule and Long Beach is a staple on the VICS schedule, so they won’t be going anywhere. In addition, Belle Isle is a Penske project, so that’s not likely to drop off the schedule either.  So we’re pretty much stuck with about a third of the calendar being street courses.

One interesting note is the season will wrap up on a road course. That’s really neither here nor there, but I think Sonoma has a better draw than Fontana, which can only be a positive for the season finale.

Since the reunification of IRL and ChampCar, fans have been getting lots of empty promises about growing the series and bringing it back to national prominence. Each year we get more lip service, with a slicked-hair salesman saying “Wait till you see what we have in store next year!” with a wink and a sly smile. This is another year of unfulfilled promises, which will drive away more hardcore fans and leave casual and fringe fans wondering what happened to this thing called IndyCar they heard about that one time.