The new 2015 IndyLights chassis, the Dallara-AER IL-15, debuted at Indianapolis earlier this year on Media Day, the Thursday before the Indianapolis 500 Mile Race. The car looks dead sexy, and the first running tests of the car at Putnam Park and at Mid-Ohio were very successful. The car appears to perform brilliantly and should be a great platform for the last step for young drivers on their way to the Verizon IndyCar Series. There’s only one problem. Cost. Sadly, it always comes down to money, doesn’t it? With every bit of the old chassis, including the wheels (that’s another story), becoming obsolete at the end of the month, all current teams will be on the same footing as any incoming team needing to purchase all new chassis, engine leases, wheels, and spare parts. It’s a significant outlay of capital especially for teams that are already deeply invested in the current equipment. The issue that we will see resolve over the off-season is who will see the value and find the funds to move into the new era of Indy Lights racing and who will decide that the juice isn’t worth the squeeze? 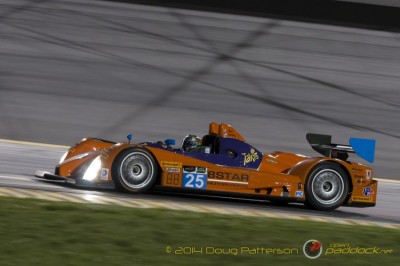 8 Star Motorsports, who has a successful prototype sportscar program in the TUDOR United SportsCar Championship in both the DP and PC classes, evidently does see value in the 2015 Indy Lights season and will represent the first new blood into the series since 2012 when Juncos Racing and Fan Force United joined. FFU is still running with Scott Anderson, but Juncos has gone back to competing exclusively in the Pro Mazda Championship. There have been rumors that some IndyCar Series teams, namely A.J. Foyt’s and Bobby Rahal’s teams, were considering joining. At the same time, some long-time participants in Indy Lights are potentially pulling out. Andretti and Schmidt are both rumored to be balking at the buy-in costs for the new chassis. At Pocono, those two teams represented three quarters of the entire grid! Then there are the smaller teams such as Fan Force United, Brian Herta Autosport, and Team Moore Racing. Budgets are tight for everyone, but when you’re a smaller operation, planning for a huge capital expenditure such as will be required this off season is challenging.

The magic number for some teams that are on the fence about 2015 seems to be fourteen. If there are fourteen cars confirmed for the 2015 season, then some teams will go ahead and pull the trigger. If not, they’ll pass on Indy Lights and either go elsewhere to compete or focus on other ventures. So fourteen is critical mass for the 2015 Indy Lights season. Will they be able to achieve that? I don’t know, but the commitment today by 8 Star Motorsports certainly helps the cause!

Buoyed by the success of its sportscar programme in the United States and around the world, including class victories in the Le Mans 24 Hours and FIA World Endurance Championship (WEC), plus strong showings in this season’s inaugural Tudor United SportsCar and IMSA Prototype Lites Championships, 8Star Motorsports is set to announce a 2015 campaign in the revamped Indy Lights Series with the all-new Dallara IL-15.

Team Owner and successful racer Enzo Potilicchio has already established a “stairway of talent”, with young drivers such as Sean Rayhall learning their craft and moving up the ranks in the junior IMSA Lites sportscar category to the TUDOR United SportsCar Championship, in both the Daytona Prototype (DP) and Prototype Challenge (PC) classes.

Potolicchio is keen to extend his young driver academy by bringing on more young, talented drivers who wish to pursue a career in single-seaters, saying: “It’s a natural step for 8Star Motorsports, which has the expertise and state-of-the-art facilities to extend its operation. And with the new Indy Lights cars coming for 2015, this is a perfect time for us to take up the challenge. We will be searching for young drivers focused on the road to the IndyCar Series and will be looking for drivers from both Europe and Asia who are wanting to build a career in the USA, as well as providing opportunities for North and South American racers to familiarize themselves with the Indy ladder. Of course, it goes without saying that 8Star will provide a completive package for talented drivers wherever the come from.”

8Star Motorsports Team Manager, Gary Neal, thinks the new Indy Lights car is a viable alternative to GP2 or World Series by Renault (WSR) for drivers moving up from Formula 3 or GP3, or those looking for a change of direction.

Neal said: “Formula 1 is such an unachievable dream for so many these days, whereas IndyCars is much more achievable in terms of budget and opportunity. The new Indy Lights program offers drivers a real shot at the big time and a sustainable career.”

With a cutting-edge facility in Pompano Beach, Florida and staff who boast a wealth of experience in F1 and IndyCars, 8Star Motorsports offers the perfect environment for driver development, as well as ample winter year-round testing opportunities in the agreeable Florida climate.