The Mid-Ohio IndyCar weekend is a special one to many of us here at OpenPaddock.net. Ok, two of us: Mr. Whitesell and myself. While we do enjoy the IndyCar action throughout the weekend, one of the true joys of the event is the variety and quantity of racing one gets to enjoy. The Mazda Road to Indy was fully represented with Indy Lights and Pro Mazda holding double-headers and USF2000 holding a triple-header. The multiple points-paying races meant that the championship standings could change dramatically, and there were indeed some changes! The final events of the 2014 season are going to be quite interesting and the championship battles may all go down to the final race. 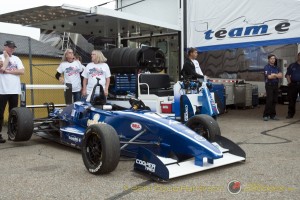 R.C. Enerson of Team E Racing started out the season strong, but a difficult Month of May allowed the Cape Motorsports with Wayne Taylor Racing duo of Florian Latorre and Jake Eidson to close the gap. Enerson’s tragic Race #2 at Toronto allowed Latorre and Eidson to overtake Enerson for the championship lead. As the trio came to Mid-Ohio, any of the three could have pulled away from the other two by sweeping the triple-header. As it turned out, the three contenders each took a race win with Enerson claiming first blood.

“The race was really good for us. We knew we had to get a good start because it can be a little difficult to pass here. I took the lead on the start and held it and then the rain came so that made for difficult conditions. Running a rain line with slick tires was awkward but I was able to hold it out to the end. These are more points toward the championship and hopefully we will continue to catch up there.” — R.C. Enerson, #7 Team E Racing 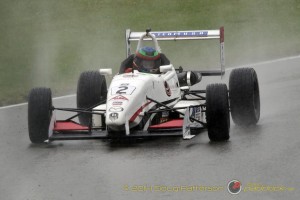 Race #2 on Saturday started under extremely wet conditions after a mid-afternoon deluge brought a pre-mature end to the Pirelli World Challenge race immediately prior to the USF2000 race. Unfortunately for Enerson, the lack of grip in the damp conditions would cause a very hungry and eager Victor Franzoni of Afterburner Motorsport, running P2 behind Enerson late in the race, to slide wide on the left over-crest Turn 5 taking out both competitors. The fault was fully on the Brazilian as Enerson had left abundant room on the inside. Youthful exuberance and last of focus on someone else’s part ruined Enerson’s chance to reclaim the championship lead. The incident opened the door for Jake Eidson to take his second victory of the season.

“I don’t really know what happened the first few laps. It was all a blur really. I passed a few cars and I was able to pass my teammate after a couple of laps. We had a full course caution and by then I had moved up to second. I didn’t do too well on the restart and lost a position. We had another caution and I was able to get a good restart that time. I saw that Victor [Franzoni] and RC [Enerson] were battling pretty hard and I was hoping to take advantage of any mistakes they made and they did. It feels great to get my second win and I’m looking forward to tomorrow.” — Jake Eidson, #2 Cape Motorsports with Wayne Taylor Racing

Sunday’s finale to the triple-header weekend saw a third winner in Florian Latorre. In contrast to Race #1 and especially Race #2, the third race of the weekend was held under perfect conditions, even if it had to be delayed until the fog had lifted enough to allow the medical helicopter to fly. With clear skies and a dry track, Latorre dominated the race winning from pole, leading all race laps, and setting the fastest race lap, sweeping all possible bonus points.

“The car was very, very fast and good throughout the race. The start was hard because RC [Enerson] gave me a lot of pressure. When I saw the caution come with three laps to go, I knew I had to stay focused and take a good restart to make a gap, but in the end the restart didn’t happen. It was a great weekend for us.” — Florian Latorre, #3 Cape Motorsports with Wayne Taylor Racing 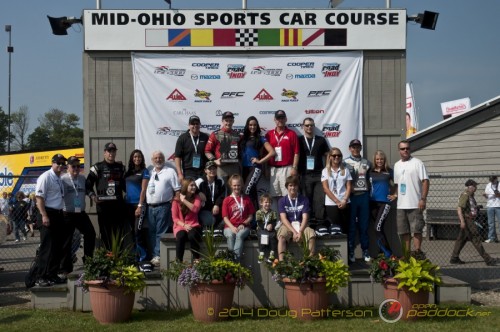 Enerson would finish on the podium, but fellow championship contender Jake Eidson would have a rough race only managing P8. With Enerson and Eidson both having poor finishes in one of the three races on the weekend, Latorre, who finished P2, P4, and P1, has stretched a lead. Right now, the championship standings are Latorre (277), Enerson (247), and Eidson (244). The season finale is at Sonoma Raceway (I still think of it as Sears Point), and the advantage definitely belongs to Latorre. Sonoma is a challenging circuit, though with big elevation changes and blind apexes. It ain’t over yet, folks!

Had Nicholas Costa started out the season with Team Pelfrey, the 2014 Pro Mazda Championship might look quite different. Costa joined the team, moving from M1 Racing where he started the season, for the Night Before the 500 at Lucas Oil Raceway in Indianapolis. His best result with M1 was 8th place which he obtained at Race #1 at St. Pete and Race #2 at Barber, but a P19 and three DNFs killed any hope of Costa making a play for the championship. Since joining Team Pelfrey, however, he has not failed to finish in the top 5! In Race #1 of the double-header late on Saturday afternoon, Costa ran a masterful race leading every race lap from pole and setting the fastest race lap. I didn’t get any images from Race #1 as the IndyCar Tweetup was scheduled at the same time, so I and a number of other IndyCar fans and several USF2000 drivers including our very own Peter Portante as well as Pippa Mann watched the race from the concession area that overlooks the Esses. It was an eventful race, as two full-course cautions forced Costa to have to defend his lead during the restarts.

“It was a tough race. I had to manage the start and all the restarts the best way I could and it worked. It was important to make a gap especially the first lap so they don’t draft me on the back straight. I managed to do that. The last couple of laps, I knew Ryan [Booth] was coming but I was kind of not pushing – I was just pushing in the places that I thought he might pass. It worked. It was tight but it worked and I am really happy for Team Pelfrey. They have done a cracking job for me the last three races that I have been with them. They really deserve this and I am really happy for my first win in the championship.” — Nicholas Costa, #82 Team Pelfrey

It was a tough race for championship leader Spencer Pigot of Juncos Racing and he would struggle from a mid-pack qualifying position and just fall short of the podium finishing in fourth. Fortunately for Pigot, his championship rival Cape Motorsports with Wayne Taylor Racing’s Scott Hargrove would finish behind him in sixth. 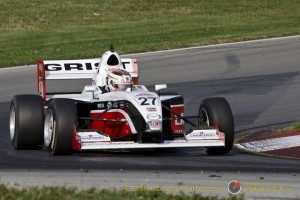 Race #2 on Sunday morning was quite a different affair as we saw something sort of rare in a Pro Mazda race at Mid-Ohio. Passing! The top honors were taken by Garrett Grist who started in third, but quickly assumed the race lead from Costa and successfully defended that lead to the end taking his second victory of the season. Costa would hold on to second, as championship contender Scott Hargrove would round out the podium, finishing in third. Championship leader Spencer Pigot had another disappointing race as he struggled for grip in his Juncos Racing machine.

“We got (Nicolas) Costa on the inside to Turn One, and we held (Kyle) Kaiser on the other side… from there, we never looked back. We had a great car with consistent laps, and if we needed to turn it up, I was able to. I’m so thankful to my Lander Property Management/DaVinci Foods guys for everything they did this weekend; I’m very happy to bring home the win for them and my family who made the trip down (from Canada) to support me.” — Garrett Grist, #27 Andretti Autosport 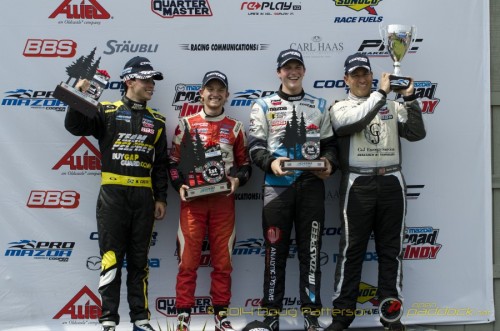 Spencer Pigot still holds control over the championship with 259 points over Scott Hargrove’s 245, but the Milwaukee Mile is not a forgiving oval. Spencer, having more experience in the Pro Mazda Chassis and with oval racing in general, I think will hold the advantage next weekend. Hargrove, on the other hand, needs to make sure to put in a solid performance at Milwaukee if he’s to have a chance at catching Pigot in the season finale at Sonoma. 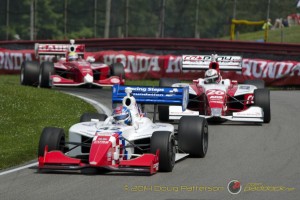 Schmidt Peterson Motorsports’ Jack Harvey has not finished below P5 all season long! While he has also never won a race, that consistency has kept him in contact with the two championship leaders coming into the Mid-Ohio weekend, Belardi Auto Racing’s Gabby Chaves and Andretti Autosport’s Zach Veach. Something about Mid-Ohio just completely clicked with Jack and he dominated both races of the weekend. Gabby Chaves would find the podium both days with a P2 and a P3 in the two races. Zach Veach was just shy of the podium in Race #1 finishing in fourth, but returned with a strong P2 finish in Race #2 on Sunday. That slight difference allowed Chaves to stretch out his lead of Veach, but more importantly, it allowed Jack Harvey with his pair of wins to over take Veach for second place in the championship standings. The game is officially afoot!

“Today’s race was a little bit harder than yesterday. I think yesterday we set the bar and the other guys responded pretty well. My car was fantastic again. I am not sure what happened at the start but all I saw was Zach [Veach] and Gabby [Chaves] come through in second and third. These guys are on fire in the championship and they were the last two people I wanted to see in those positions. I had a good restart. They were also very fast and I was pushing as hard as I could at that moment just to be sensible, to be smart and not overwork anything. The car felt as good at the end as it did at the start so just a big thank you to all my team and my sponsors. I wouldn’t be here without them so this victory is as much for them as it is for me.” — Jack Harvey, #42 Schmidt Peterson Motorsport 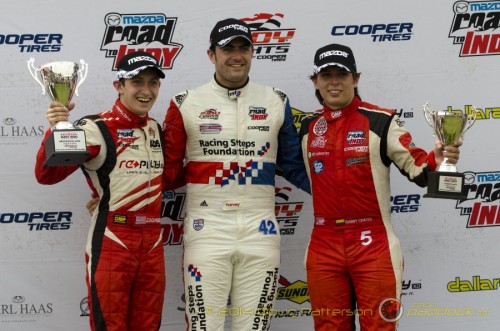 Chaves still leads the championship with 431 points, but Harvey is closing in with 413 points. Veach is still within reach, in spite of dropping to third in the standings, holding 407 points. Like the Pro Mazda Series, the Indy Lights Series now heads to the Milwaukee Mile before wrapping up the season with a double-header at Sonoma. I think Chaves has the strong advantage going into Milwaukee. He’s the current leader, and he has swept both ovals this season winning at both Indianapolis and at Pocono. The real question is whether Harvey and Veach can keep in contact enough to challenge at Sonoma.