The 12th running of the Indy Lights Freedom 100 at the Indianapolis Motor Speedway took place yesterday on Carburetion Day, and the 100-mile, 40-lap sprint was the magnificent race that I’ve been raving about for years. As we came into the Month of May and started with the Indianapolis Grand Prix, Andretti Autosport’s Zach Veach and Belardi Auto Racing’s Gabby Chaves were leading the championship having split the victories in the first four events. The grand prix weekend didn’t go as planned for either of the two drivers, as they both finished well back in the field in both races. This permitted Schmidt Peterson Motorsport’s Luiz Razia and Jack Harvey to close the gap. With their dual podium finishes and a race win for Razia, Chaves was relegated to third while Veach clung to an extremely thin championship lead. 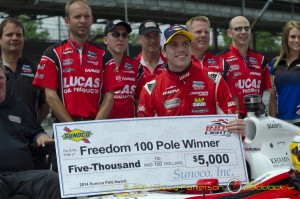 Step ahead to Thursday’s qualifying. Razia and Harvey were competing on the 2.5-mile oval for the first time. In fact, it was their first oval event ever! Granted, SPM equipment is top notch and you’re unlikely to find better engineered machines on the grid, but it was still a bit surprising to see them topping the speed charts during morning practice while Zach Veach struggled posting only the sixth quickest time. Qualifying went much the same way with Razia taking pole and Harvey starting on the outside of Row 1 in P2 next to his teammate. The Andretti teammates, Matthew Brabham and Zach Veach, would fill Row 2 starting P3 and P4, respectively, while Gabby Chaves would start in fifth after a slow second lap on his qualifying run ruined his chance at the pole. Things at this point looked bleak for the championship leaders, but qualifying and racing are completely separate beasts, especially at Indianapolis.

Carb Day started crisp and clear with the promise of mild temperatures an abundant sunshine all day long. This brought the fans out in droves! Ok, granted, the party aspect of the day and Sammy Hagar was the draw for most of the people, but there were a good number of people in the stands, too. From the drop of the green flag, Razia was under constant assault from Brabham while Harvey fell back from the front. Veach and Chaves pushed forward and joined the fight for the lead. Brabham would overtake Razia on Lap 5 and hold it for a couple of laps until Razia retook the lead. That lead would only last for a lap before he would lose the lead and then two more spots as Veach and Chaves continued their forward progress. Veach would eventually take the lead from his teammate on Lap 13, but again only for one lap as Brabham would reclaim the front spot on Lap 14.

As the field went into Turn 1 on Lap 15, Chase Austin’s #42 Belardi Auto Racing machine became wicked loose. Austin tried repeatedly to catch the car, but it hooked in and slammed into the tire barriers on the leading edge of the inside wall of the North Chute. It’s a rare place for a car to contact the wall, and the impact was brutal. Austin would suffer a fractured wrist, but that would be the extent of his injuries. He was extremely fortunate given the violence of the impact.

Less fortunate was one of the photographers just on the other side of the wall. That position is a prime spot for photographers, and I had spent some time in that exact spot just the day before. Debris from the impact struck the photographer in the face injuring his nose and sending him to hospital. Fortunately, reports were that he was cracking jokes with friends and family that evening in the hospital and will ok. It was a scary moment, and a reminder that things can get sketchy and dangerous in a heartbeat at the track. Even as a fan, one should always keep one’s head on a swivel.

Once the race got started again, the knife fight for the lead rekindled with Chaves joining the party as well. Chaves would take point on Lap 24, but was never able to pull away from Brabham and Veach. The three would jostle and jockey for position for the remainder of the race as Brabham and Chaves would exchange the lead a couple more times. Veach was engaged in the battle as well swapping P2 and P3 with Brabham and Chaves. As with last year’s race, the leaders were all within striking distance of each other and the result would be determined by who had the good position down the back stretch and into Turn 3. Chaves ran on the higher line through Turn 3 keeping Veach down low. This allowed Chaves to carry more speed through the north end of the track and tuck behind Brabham as they rolled through the exit of Turn 4. With the aerodynamic advantage of Brabham punching a hole in the air, Chaves was able to build more speed than the leader and pulled along side as they came down the front stretch, edging Brabham by the cord length of the front wing!

“I’m speechless. It hasn’t really sunk in yet. I feel like I’m going to wake up in the next minute, discover it’s a dream and I have to go do it all over again! I’m slowly starting to understand what just happened. Early in the race, I was just trying to get myself into a position where I could have a good shot at it on the last lap. Once I was in the top three, I knew I didn’t have to make any moves. The only to make a move for second was because P4 was getting pretty racy with me – the best way to stay in the top three is to have a cushion behind you. Zach put in a good counter attack on me for second, so I lost a spot. I tried to get it back in Turn One on the last lap and got a little loose
but I didn’t lose much speed; I kept my foot in it. I was able to get a good run on the back straight and get around Zach on the outside in Turn Three and got a good run around the outside of Matt in Turn Four. I drafted on him a bit onto the front straight and managed to get it by just a little bit.

“My car wasn’t spot-on driving in the low line behind another car, and I wasn’t too comfortable driving the higher line, even in clear air. But being here last year and going through all that, I know the car is going to be able to do it, even if it doesn’t really feel safe. I knew the car could take it. On the last lap, you’re committed to whatever happens; you’re just going to keep your foot in it. You can’t lift. I thought we’d won, but the pylon still had the #83 in first. It wasn’t until I exited Turn One and everyone on the team came on the radio, screaming and yelling, and I was pretty sure what the message was!” — Gabby Chaves, #5 Belardi Auto Racing

With Razia and Harvey finishing fourth and fifth, and Brabham and Veach claiming second and third, the championship standings have tightened up considerably. As we head into the Summer Break for the Indy Lights series, Chaves will arrive at Pocono Raceway with a one-point margin over Veach with Razia, Harvey, and Brabham not far behind. The Freedom 100 showed how important experience is when it comes to racing on a oval, and they don’t call Pocono the “Tricky Triangle” for nothing!