On a pretty crowded weekend for the SCCA’s Midwest Division, the second rallycross event of the year for the Kansas City Region still had a good turnout with representation from many of the neighboring regions. The weather early in the morning was brilliant, and we were optimistic for a gorgeous and comfortable day. Those hopes were dashed, however, as the Sun continued to climb. 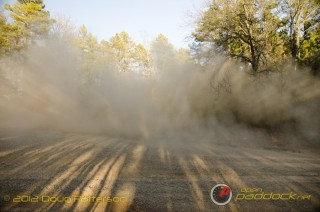 Temperatures soon reached the 90’s while the humidity between 50 and 60%, and the wind struggled to be much more than a slight stirring. It was hot, and with the lack of rain, it was dusty! The dust level reminded many of us at the event of the 2012 Rally in the 100 Acre Wood where the dust lingered on the stages, making visibility very tough.

This was a new site for the Region, located on a narrow four acres, in Paola, KS on what was a corn field last year. The course was a winding out-and-back with a challenging 180 turnaround at the far end. Being so narrow, it wasn’t possible to run two cars on course without having safety concerns, so it was one car at a time. Fortunately, although I say we had a good turnout, that’s tempered by the fact that this is a fledgling rallycross program and so “good” meant about 20 competitors. Each driver still got four runs in each of two sessions with Stock class cars running in Heat 1 and the Prepared and Modified classes running in Heat 2. 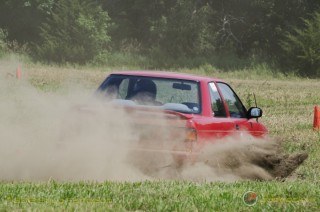 The dust was an issue during the morning session as the combination of a dry spell and running on tilled ground caused the surface to quickly turn into the consistency of talcum powder. The dusty conditions made the second half of the run back uphill toward the finish challenging, as the dust lingered in the air limiting visibility, and settled on the cones turning them from their normal bright orange to a light brown. It put a large emphasis on course knowledge and memorization. Forget about an element and you might not realize you missed it until you’re past. Unlike Solo where it’s your best run of the day that counts toward your final classification, in Rallycross, every run counts and your total time over all runs plus penalties are used to determine the final results. Hitting a cone is a two-second penalty as it is in Solo, but a missed element is ten-seconds. That’s always painful, but on a 40-45s course for the fast drivers, ten seconds is a serious setback. 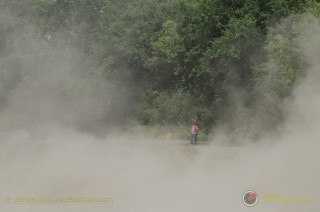 For the afternoon run, we ran the course in the opposite direction, and opened up some of the tighter elements. While the wind had picked up a little bit, the dust was even more of an issue for our final set of runs. Once a car was on course, we couldn’t seen anything but a giant cloud of dust, and we had to simply listen to the radio for penalty calls and wait for the car to emerge from the cloud of silt as they came back uphill to the finish. In the end, no one lost any major bits, save for an occasional mudflap and my rear view mirror, and everyone had a good time playing in the dirt.

“Event 2 was hosted by Mike Norman at his property near Paola, KS. I think we can call this event the Paola Haboob, the dust clouds were so huge, they probably blocked out the sun in Olathe!!! We had 15 attend this event, as well. This time we had some new faces, along with the out of region members, from Oklahoma and Ozark Mountain Regions. Thanks to Scott & Jeanie Creech and Bob Seelig for helping out as Safety Stewards, and to Jim Rowland and his guidance throughout the day. Doug Patterson and Tim Steger arrived early to set up course. They found it was easy to draw up on paper, but difficult to maneuver around Mother Nature’s best efforts of tree stumps, gulleys and washes. With the help of our stewards, they ended up with a fun course.

“This event featured a twist, as we ran counterclockwise in the morning 4 runs and then reversed direction for the afternoon 4 runs. Course changes were required as we tried to navigate the natural woop to do’s of the site and keep everyone grounded. The conditions were ever changing throughout the day, making it a challenge to get the most out of yourself and the car. The winning times were in the 320 second range again.” — Rallycross Chairman, Jerry Irvine

I want to give a shoutout to two of the more interesting cars that came to compete. First is the Dirt Dog, a Subaru that has undergone an aggressive weight reduction program. This has been at the Kansas City Region rallycross events before, and it’s good to see them back. It just goes to show that you don’t need an expensive high-end, highly-prepped car to have fun and be competitive in a rallycross event. One of the coolest customizations I’ve ever seen was the hood of Brandon Porter’s old Volvo 245 wagon. Chalkboard paint covers the hood and it’s accumulated a variety of interesting graffiti over time. Gives me ideas for the old Focus SES as it nears the end of it’s daily-driver duties. 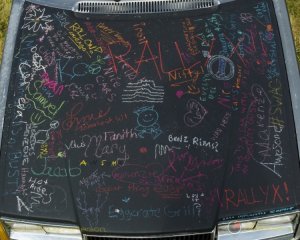 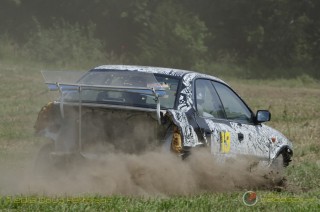