Editor’s Note: Mike Shaw has once again given us a remarkable rally article. He and his wife attended the final round of the Rally America National Championship, the Olympus Rally. This was Mike’s second rally of the year, having been to the Oregon Trail Rally earlier this year. In spite of the on-stage spectator areas being closed, the service park and super special stage still offered plenty of excitement.

We welcome Mike’s contributions and encourage the rest of you to follow in his footsteps. Have an motorsports opinion, or been to a unique event? Share your thoughts with the rest of the motorsports community like Mike has done and send it to us here at OpenPaddock.net. Our motto after all is “Motorsports commentary for the fans, by the fans.”

Unfortunately for rally enthusiasts, officials announced last week that there would be no spectating on the forest stages of the Olympus Rally this year. Like a lot of the nation, the Pacific Northwest has had a drier summer than usual. More than a month of hot dry weather has turned the forests into a tinder box, and the land owners were not keen on the thought of their valuable timber investments going up in smoke due to a burning ember escaping a spectator’s barbeque. 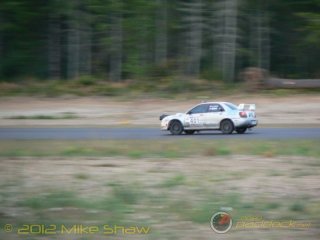 They did leave one place for fans to spectate, and that was the one Super Special Stage at The Ridge Motorsports Park just outside of Shelton, WA. The Ridge was also home to the service park for all the teams. The Ridge Motorsports Park is a brand new road course in its first year of operation. Being so new they still haven’t constructed a formal pit area, grandstands, etc. So the teams were spread out over a dirt and gravel swath that will eventually be turned into a drag strip. Spectating took place up on top of the ridge, but with no elevated viewing stands it limited what could be seen. Unlike the short stages at Portland International Raceway in Oregon, the stage here took place entirely on the tarmac racing surface.

From purely an action standpoint, there wasn’t a whole lot to see. Spectators were able to view cars coming down a long straight just past where they had climbed up a hill and then see them hard on the brakes into a left hairpin, followed by a short straight, and finally into a right bend through the stop boards. Even if we couldn’t see a lot of the course, the keen racing fan would find some of it interesting. For the more educated racing spectator it was cool to see a gravel spec car on gravel tires slam on the brakes and get a little squirrely on the tarmac as it approaches the hairpin. That took some serious car control and more than a few turned into the hairpin at the wrong time. The best show for the fans came from Chris Duplessis and Alex Kiruhaini in their little Fiesta R2. Chris went all out and slid through the corners smoking tires and all, yet didn’t appear to lose any time doing it. Runner up would go to Will Orders and Toni Fever. Right after the stop boards Will floored it and did a great sideways drift for the fans in his rear wheel drive Nissan Silvia. Everyone else kept it pretty clean. At least that we could see because it was getting dark fast. 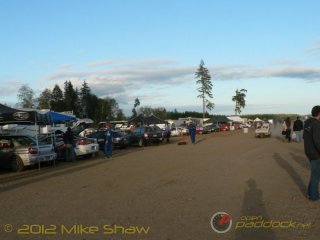 The best part was the service park. As is typical with a rally event, it was a completely open environment where you could walk up and talk to drivers, co-drivers, mechanics, you name it. I walked up to none other than Chris Duplessis and asked him if he would sign something for me. He graciously agreed and then I spent another 10 minutes just chatting with him. Chris is such a cool guy and even introduced me to his wife and their dog. He’s really is just an average guy…who happens to know how to drive extremely fast! I asked about his plans for the 2013 season and he said he is contracted with Ford to do all the Rally America events, which is good news for us Duplessis fans! Unfortunately there is no more WRC Academy in Chris’s future, but he loved the experience. He said Finland was a dream come true with hundreds of thousands of rally fans lining the stages. It was the experience of a lifetime. I sure wish we had that kind of excitement for rally here in the states!

As a side note, this was my wife’s first time going to a rally event with me. Unfortunately she didn’t get to witness any stage action other than the tarmac super special. I was curious to hear her impression of the rally and the people that make up the rally community. First she said she was surprised by the diverse mix of fans at the rally. There were families with kids, older people, teenagers, it covered the whole spectrum. She was especially surprised by the large number of women involved in rally racing. As we walked through the service park she kept seeing one woman after another in a driving suit. There were even a couple of ladies that appeared to be in their 50’s competing. When I told her about Natalie Richard and her amazing record as a co-driver, she was even more impressed. My wife also really liked the openness of fans to discuss the specifics and technicalities of rally racing to newbies like her (apparently she prefers to hear it from people other than me!). She said it was frighteningly fascinating to see cars on the verge of losing control and yet the drivers still being able to keep the vehicle going where they wanted it to. She said it still isn’t her favorite sport (her biggest complaint was getting covered in dust), but she found it much more interesting and exciting than she had thought it would be. Maybe I’ll be able to get her to come out to Oregon Trail next year where we can see some stage action. 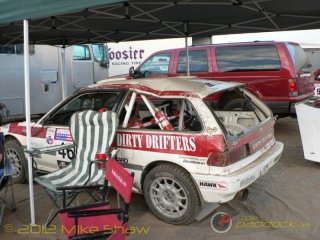 As we walked down the service park we saw a battered Honda Civic hatchback that appeared to have rolled at some point. I walked up and asked what had happened. Sitting in a camp chair was “Dirty Drifters” co-driver Daniel Norkus and he told us in detail what transpired. The short story is that they rolled twice landed back on their wheels, drove on until their hood flipped up, tossed that in the woods, and all the while only losing about 30 seconds! Now THAT is rally!

For those wanting more detail, Daniel said they were going into a left 4+ went wide and rolled twice. He started to open his door to get out but suddenly heard the engine re-fire and felt the car moving again. Still a bit dazed he grabbed his pace notes and he and driver Brian Gottlieb continued on through to the end of the stage. Surprised at how little time they lost they decided to drive on through the next two stages hoping to make it to service and fix what they could. As they pressed on the lack of windows made the car fill with dust. A car clouded in dust inside and out is hard enough to see out of, but then the hood suddenly flipped up completely blinding them. They stopped and found the front two fastening pins were sheered, so they removed the hood and left it in the woods to be retrieved later. Thankfully they made it to service, but further inspection of the car revealed that the suspension was too messed up to continue. Their rally was over.

I was impressed with the success of the safety features of the car. The roll cage was still intact even though the body was wrinkled and bent all over. Daniel said his head hurt, but was otherwise unscathed and thankful to be alive. He was saved not only by the safety requirements of the car, but also from a hybrid HANS device he uses. This hybrid restraint not only protects the head and neck from snapping forward like a traditional head and neck restraint, but it also prevents the head from snapping from side-to-side. Daniel said it was the craziest rally he had ever experienced and promises to return next season, however this time in the left seat driving his own car.

Even though there wasn’t much for spectating It was still worth a 3 hour drive to see some of the best drivers in North America and to support what I feel is the most challenging form of motorsport.