Editor’s Note: This is Part 2 of Mike Shaw’s (@oregonwings) summary of the recent Oregon Trail Rally. As Shaun mentioned in Part 1, we are very happy to have great contributions and insights from fans like Mr. Shaw. After all, this is exactly what we at OpenPaddock are all about: motorsports commentary for the fans, by the fans! Enjoy Mr. Shaw’s Day 2 summary and be sure to check out the great collection of photos he captured at the rally.

OREGON TRAIL RALLY – DAY 2
Day 2 of the Oregon Trail Rally is the toughest by far. The first 2 stages take place on the forest roads outside of Hood River, a town about 50 miles east of Portland in the Columbia Gorge. The spectator viewpoint is for the 1st (SS5) and 3rd (SS7) stages up on Fir Mountain road, which is SE from the town of Hood River. After driving into the hills a ways they eventually block off the road and divert traffic into a generous homeowner’s field for parking. Parking is free, but if you want a ride up to the actual spectator viewpoint in a shuttle van they charge a few bucks (all the money goes to charity). Or if you are cheap you can hike the last mile up to the forest road.

The Fir Mountain viewpoint has the cars coming down a short but fairly steep downhill section of logging road and then they make a left hand hairpin that is exacerbated by a set of hay bales to make the corner that much sharper. One series of bales is on the steep downhill straight forcing the drivers to stay on the inside of the corner, and the next one at the base of the hill forces them to make a sharp right before powering around the off-camber left hairpin. Essentially it is forcing the drivers to do a “Scandinavian Flick.” I was a little late getting there, so my viewing choices were slim. The course was already “live”, so I couldn’t cross to the other side. This meant that I ended up just below the first hay bale partway up the hill looking down on the turn. There was a small crowd of about 150 people some of which were familiar faces from the night before. The nice thing about this spectator view is that it is sponsored by Dick Hannah Subaru from Vancouver, WA. They bring out a BBQ and grill up hot dogs and provide free drinks for everyone, which was perfect because I stupidly forgot my cooler at home. Had it all packed with food, then left it in the middle of the living room. Brilliant! They also had a PA system hooked up where they broadcasted interviews with the drivers from the service park before they came into the stage, as well as an on-site announcer that gave anecdotes on each driver that came through. 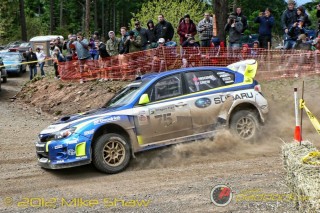 First on the road after the zero car was David Higgins in his 2012 Subaru WRX STi. Someone farther up the hill yelled “CAR!” and everyone brought up their cameras. In a split second the car appeared and you could hear the chirping anti-lag and his tires scratching for grip on the loose gravel as he descended the hill. There was a blast of an air horn and jingling of cow bells as he tossed the car first to the left and then to the right around the hay bales. The crowd cheered as accelerated in a blast of rock spitting dust, and almost as quick as he arrived he was gone. Many looked down at their cameras to see if they got that perfect shot, some sharing with the people next to them. They didn’t have much time to gloat or despair, as It didn’t take long before Antoine L’Estage to arrive next into the turn. The Evo making a very distinctive sound as it followed a similar line to Higgins. Finally Crazy Leo came through and went a little wide, but threw down the power to get “The Beast” back in line. After that it was one car after another with the 1 minute intervals of the lower classes. The visiting Australians in their 400HP rear wheel drive Nissan Silvias (basically the same as a 240SX but right hand drive) awesome to watch and could be heard for a long ways after they disappeared from view around the corner. The Ford Fiestas were also spectacular as they were very nimble and fast for their small size. One of the crowd favorites had to be “Garth” the driver of the red 1969 Saab 96. He was as fast at going around the hairpin as some of the super production 4wd modern cars! Some of the drivers even tooted their horns in appreciation to all the spectators cheering them on.

In about an hour all the cars had gone through and the hot dogs had just gotten done. After the sweep cars came through and some lunch the road was open for spectators to cross. I went to the other side and situated myself just opposite the hairpin inducing hay bale. I wouldn’t see the cars coming down the hill for the second pass through this stage, but I would have a better view of them powering around the corner and accelerating into the distance. Higgins once again showed how it was supposed to be done, but then there was suddenly a gap of more than 2 minutes. What? No Antoine L’Estage? I pulled up Twitter on my phone to see if there was any word of what happened, but no word yet. At this point they would have just come out of service to do the second run of the day so the car should have been in good condition. Sure enough after 4 minutes we saw Crazy Leo as the next car through. Something had definitely happened. Cars started trickling through the stage, some of them with horribly long gaps. There appeared to be a lot fewer cars than the first time through. Apparently there was a train crossing backing up the transit traffic, in addition to that a number of cars felt the sting of the tail that was the stage after Fir Mountain named Ketchum. Ketchum is a very rough road with large rocks everywhere. It’s a real car breaker. Twitter finally explained what happened to L’Estage. Drive-by-wire throttle issues. Bummer to have a mechanical failure cause a DNF. Eventually cars stopped coming, but unfortunately for us on the opposite side of the road from the exit, the sweep car hadn’t come through yet. It was announced that the sweep car was on the road, but after 30 minutes of waiting with no cars we were more than a bit restless. I looked at my watch and was worried I’d never make it out to Dufur in time to watch the next stage. Eventually the safety marshal let us pass, but it seemed like forever. As I pulled out of the parking lot, me and several others were driving a bit more….shall we say “spirited”. Google maps on my phone said it would take 55 minutes to get there….and the stage start time was in 45 minutes. I got there just in time to see the final zero car come flying down the hill. 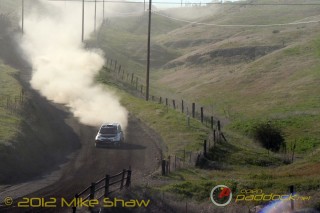 Starveout – This has to be one of the best rally viewpoints EVER! I’ve been wanting to get to this specific spectator spot ever since I heard about the Oregon Trail Rally. The cars descend a very long, very steep hill and at the bottom make a 90 degree off camber right turn through a gate and then speed off. The spectators all get a great view from this location as the viewing area is on a small knoll in a field allowing those in front and in back to easily see. It is simply epic! David Higgins and Craig Drew appeared at the top of the hill and descended like a rocket with a dust cloud behind them as if they had blasted off a launch pad. A water truck had wet down the area near the bottom to lessen the dust going into the crowd, but the way that Higgins hit the brakes and took the corner so carefully it made me wonder whether they told them ahead of time that they were going to add the water. The small crowd cheered as cars came close to tagging the gate as they slid under braking at the base of the hill. Some braked early and took the corner slow and steady, others took a more aggressive approach and used a sharp skid to slow them down almost to a stop then accelerated away. It was great fun to watch. I stayed through both runs of Starveout and then that was it for the day. If it was a long day for me, it must have been extremely long to the drivers, co-drivers, and service crews.