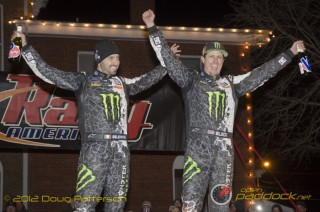 From the very beginning Block set a blistering pace outpacing his rivals to lead after day one. On the first leg of the second day, Block lost time to Higgins with a pair of tire punctures and suspension damage. After service, the team made up their lost time and pushed hard during the last two stages to secure the victory.

“I’m stoked about winning my 6th Rally in the 100 Acre Wood,” said Block. “The battle against David Higgins was intense on every stage. He’s the current Rally America champ and one of the people who helped teach me how to race a rally car when I first got started, so to finally compete against him on this level was great, I really enjoyed it. I’m definitely looking forward to running against him again later this year in Olympus.”

Three-time Polish Rally Champion, WRC and Dakar Rally driver, Krzysztof Holowczyc took the third podium position in his Art Logisitics Racing Team Mitsubishi EVO. The team was slightly off the pace after replacing an engine damaged during testing, but managed to take advantage of some key competitor retirements to make the podium.

Most notably, Rockstar Energy Drinks’s Antoine L’Estage and Nathalie Richard, last year’s Rally in the 100 Acre Wood overall winners, broke a transmission on stage 4. The characteristically reliable team was battling with Block and Higgins, and within seconds of the factory-backed teams before their mechanical failure ended their run.

Lauchlin O’Sullivan and Scott Putnum won the Super Production Class coming from behind to snatch victory from current SP Class leaders Travis and Terry Hanson by 43.9 seconds. O’Sullivan overcame various car problems to overtake the Hansons when their car verged on the brink of overheating in the last few stages. The win is particularly sweet as the team adjusts to the only Mitsubishi EVO in the class.

Four 2WD Class cars placed in the top 10 overall as evidence that Rally America’s 2WD drivers can beat cars with twice the horsepower and place in the upper third of the 65-car field. 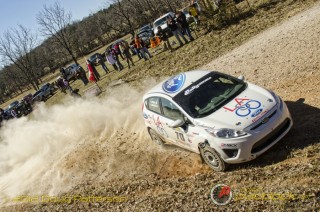 Fans who couldn’t attend the event were able to watch tape-delayed driver interviews and stage rally action on www.rally-america.com.

The third round of the Rally America National Championship takes place at the Oregon Trail Rally May 4-6 in Portland, OR.