Normally, I’m not keen on just posting a press release and leaving it at that, but in this case, I don’t know what else to say. Ken Block returning to the 100 Acre Wood? Outstanding! He has absolutely owned the event in past years having won the rally more often than any other person in the event’s history. To be sure, we will have photos and hopefully some interviews as well as Shaun and I head to the 100 Acre Wood next week to cover the event. 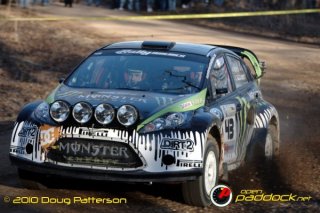 WILLISTON, VT, February 15, 2012 – Rally America is proud to announce that Ken Block, WRC driver and creator of the Gymkhana videos, and co-founder of DC Shoes, is joining the 2012 Rally America National Championship to compete in the Rally in the 100 Acre Wood. The event will be held on February 24-25 in Salem, Missouri. Fans who cannot attend in person can catch many hours of live event streaming and video recaps, as well as regularly updated stage times and results, at Rally-America.com.

“We are very excited that Ken Block will be competing in the upcoming Rally in the 100 Acre Wood,” said Bill Fogg, CEO of Rally America. “There is always a buzz around Ken, his racing skills and his personal brand. His participation is thrilling for our race organizers and Rally America fans all over North America.”

“Rally in the United States has definitely grown in popularity since I first got started back in 2005,” said Block. “It’s been great to watch that growth and I’m stoked that this year I’m finally getting back to the series I first started in by competing at Rally in the 100 Acre Wood. It’s one of my favorite rallies, so I’m stoked that it’s how I’m kicking off my 2012 season.”