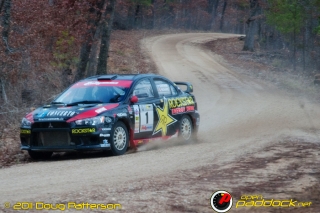 FROM: RALLYCAR: Antoine L’Estage and Nathalie Richard have won the 2011 Rally in the 100 Acre Wood after a flawless drive from start to end. L’Estage set a blistering pace early on, winning ten of the event’s fifteen special stages and finishing 17.7 seconds ahead of international rally ace David Higgins. This victory was a particularly sweet one for L’Estage, who celebrated his birthday on Saturday, the second and final day of the rally.

Subaru Rally Team USA’s David Higgins and co-driver Craig Drew placed second overall, netting their first points of the season and keeping pressure on L’Estage as they gave chase for the duration of rally. Higgins’ Subaru teammate Dave Mirra rounded out the podium by maintaining third overall through most of the event with a solid drive. This is the second consecutive podium finish of the season for Mirra and co-driver Marshall Clarke, who are coming into their own after only two events together.

A surprise last-minute entry from former SRT USA driver Travis Pastrana was short lived when Pastrana and co-driver Jeremy Wimpey crashed and rolled their 2007 ex-Colin McRae WRX STI on a left-hand corner on the second stage of the rally.

The Rally in the 100 Acre Wood is based in Salem, Missouri and is well known for its fast and flowing stage roads. The best teams from all over North America and beyond gathered to contest over 120 competitive miles spread throughout the foothills of the Ozark Mountains. This year crews were challenged with unusually damp conditions after heavy rainfall on the Thursday before the rally began. The 100 Acre Wood Rally is the second of six rounds in the Rally America National Championship and has traditionally been won by Ken Block and co-driver Alex Gelsomino since 2006.

Privateers Travis and Terry Hanson maintain their lead of the overall Championship before the Series heads West for rounds 3 and 4. The Hansons inherited fourth overall after ex-factory driver Ramana Lagemann and co-driver Chrissie Beavis had a big crash on SS8, putting them out of the rally. The Hansons had another smooth, trouble-free event, winning Super Production in their Subaru and extending their points lead over top runners David Higgins and Antoine L’Estage.

Lauchlin O’Sullivan and co-driver Scott Putnam overcame various mechanical issues this weekend to place second in Super Production by only 0.6 seconds on Roman Pakos. O’Sullivan spent his day closing the gap between himself and Pakos after losing time to him on the second loop of stages. O’Sullivan placed sixth overall. Pakos and guest co-driver Bartosz Sawicki finished third in class and seventh overall.

In two-wheel drive competition, Wyatt Knox charged to a commanding first place finish with co-driver Ole Holter, finishing nearly three minutes ahead of Chris Greenhouse and Brian Johnson. Greenhouse claimed second in the 2WD National, but was concentrating on his Group 2 Regional effort, which he won on Friday and placed second on Saturday. Ford Racing driver Dillon Van Way claimed third place in 2WD after dealing with electrical issues on the opening day of the rally. Van Way was unable to make up time on Greenhouse on Saturday’s stages and finished 19th overall.