Coming from the north, its easiest to try and get to Rolla, MO before going to Salem. From Kansas City, take I-70 east until you get to Columbia, MO. Turn onto Hwy 63 south at Exit #128 and take it all the way down past Jefferson City (wave at the capitol) and on to Rolla. From St. Louis, simply take I-44 straight to Rolla; no turns. Once in Rolla, take Hwy 72 south to Salem. If you’re coming from the south, well, check out Google Maps. That’s all I can tell you. The roads and highways in the Ozarks of southern Missouri are convoluted at best. There are some nice maps and links at the 100 Acre Wood website on their “Travel Information” page. Be prepared for the fact that arriving in Salem will only be the beginning of your driving.

Start/Finish and Other Key Locations 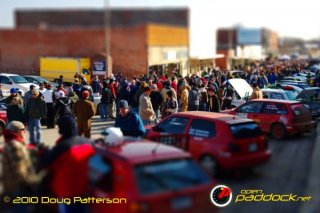 I highly encourage you to visit one if not both of the Parc Exposé periods during the rally. This is your chance to really get up close to the machines and to the drivers and co-drivers. Many of the competitors are very approachable, and are typically always willing to “talk shop” if you have questions about their machines or rallying. Be warned, though, if you start talking about liking rallying, you might get the hard-sell recruitment pitch. The next thing you know, you’re buying an old Ford Escort and fitting it with a roll cage and racing seats! Be sure to bring a felt pen and a camera. This is also your chance to score some autographs and get photos of your favourite drivers and co-drivers. The level of access fans have at a rally beats that of any other form of motorsport hands down!

Friday’s location for the Parc Exposé changes from year to year, but on Saturday morning, Salem is the traditional location and Main St. is lined with rally cars! Fantastic sight, and its not too far from a great breakfast joint that I’ll talk about later.

Finish Line
The Finish Line and final celebrations are also in Salem, nearby where the Saturday Parc Exposé is held. This will take place late Saturday night, typically around 9:30pm. Watching the victors spray the champagne is always a treat, and especially at a rally where you can get a lot closer to the victory celebration than viewing on a Jumbotron! If you’re not careful, you just might find yourself spritzed with the bubbly. 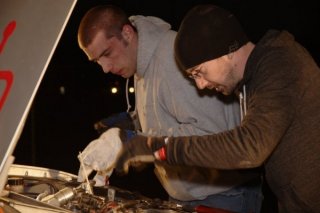 Service Parks
Although the Service Park locations, like the Parc Exposé locations, can also change from year to year, the Viburnum school parking lot has been the traditional location. Just as I’d recommended the Parc Exposé as a great opportunity to talk with the drivers and co-drivers, the service park area gives you the opportunity to watch the mechanics and crew of the rally teams do their magic. The cars come off the stages in a wide assortment of disrepair, and its the crew’s job to get the car patched up and ready to take on the next batch of rally stages. It really is amazing to watch the teams work. 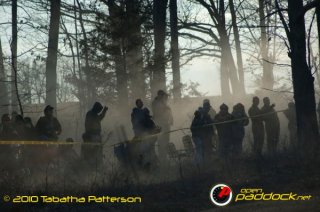 The spectator areas are highly variable, and the schedule of when the cars will be coming by each area changes drastically from year to year. Be sure to pick up the latest maps, GPS coordinates, and event schedule for the various locations from the event website. There’s a section on the website under the “Spectating” menu called “Locations“. Of all the spectator locations, don’t miss the Super Special Stages at the Potosi Lion’s Park. Most locations, you’ll see the cars make one pass by you, but during the Super Special Stage, you’ll see the cars negotiate a very tight and technical circuit all within view of the spectators.

Bring a map AND a GPS
Spectating a rally is nothing like spectating any other race. You won’t be at any one spot, but rather you’ll be moving from location to location throughout the day as the competitors move through the stages. In fact, it will almost be as much of a rally for you as it will be for the racers. In the weeks before the race, the rally organizers will post the spectator locations and the stage schedule on the rally website, http://www.100aw.org/. They will not only provide a maps, (which you should print out) they will also provide the latitude and longitude of the various locations. I highly recommend programming these coordinates into your GPS prior to attending the rally. The quicker and more efficiently you’re able to follow the competitors around the rally, more more time you’ll have to actually spectate.

Wear good shoes
Since the stages are run on public roads, there aren’t giant parking lots available at the various spectator locations. You’ll be parking along the side of some gravel road and walking down to the spectator area from there. Depending upon when you arrive, you may end up walking quite a ways, so bring very comfortable walking shoes. Also keep in mind that this is a February rally and the weather is likely to be rather variable. It could be warm and dry, but it could just as easily be cold and wet. Good weatherproof hiking boots would be my recommendation for footwear.

Pay heed to the marshals
While at the spectator areas, always pay attention to the safety marshals. They aren’t there to be jerks, they’re there to help keep you as safe as possible while you’re spectating the rally. If they tell you to move, then move. Very likely, you’re in a location that’s been designated as a runoff area in case a driver loses control or loses his brakes. Even when you’re where you’re supposed to be, never turn your back toward the oncoming racers. Like any form of racing, unexpected things happen at unexpected times. You’ll want to keep your eyes open and your wits about you in case a driver gets into trouble. Its also a good idea to have in mind an egress path in case you need to get out of the way quickly. Trees are you best friend in these cases.

Bring a camera
From the spectator areas, there is an opportunity to see some great action, and usually you’ll be at a point where the cars are sliding around a slower corner. This means that you’ll have great opportunity to take some really great photos, even if all you have is a cell phone camera. At the Parc Expose and Service Park areas, you will be able to get right up next to the rally cars and meet many of the drivers. If you have a camera handy, you can very likely get a picture of you and your favorite driver.

Dehydration and/or Hypothermia
Bring lots of bottled water with you. Even if its cold out, you’ll be doing a lot of walking and its easy to get dehydrated. Speaking of it being cold, it likely will be. This is in February, so temperatures can be highly variable. I’ve been when its been 50+ degrees, and I’ve been when its been snowing. Dress in layers! Even if you think its warm during the day, when the Sun goes down for the night stages, the cold air can really settle in fast in the hills of the Ozarks. Be prepared.

Getting run over
Probably the most important thing to avoid is getting ran over by a rally car. At the spectator areas, the marshals will help you stay clear of any runoff areas and typical danger zones, but keep your eye on the racers. Never turn your back to traffic! Things in a rally can turn sketchy really fast, and you want to be ready to move if you need to. Always have an escape route in mind, preferably one that puts a few trees between you and the road.

Moving Violations
Needless to say, with so many speed freaks in town for the rally, all of the area law enforcement officials will be extra vigilant. If you get pulled over, don’t expect for an instant that you’re going to get a warning. Just be polite, take your ticket, and move on. There will be a lot of traffic, more than what the roads of the area are typically used to having. On the 100 Acre Wood site, there are listing of various restaurants in Salem, and although I’ve certainly not tried them all out, I can highly recommend “My Place” for some of the best breakfast around. The biscuits and gravy are simply amazing! The other place I’d highly recommend is the BBQ joint in Caledonia! Magnificent BBQ!! Don’t worry about trying to find it. Caledonia isn’t that big, and the restaurant is right on the highway.

If you’re looking for other sites, check out the Motels and Restaurants sections under “General Information” on the 100 Acre Wood website. More than any other event I’ve been to, the promoters of the 100 Acre Wood Rally have done the best job at compiling all of the information a fan really needs to come and enjoy a motorsports event. If you have recommendations, additions, or corrections to my guide here, please forward them to me at doug@openpaddock.net.