The Mazda Road to Indy has been a very successful program since it’s inception. We’ve certainly done our best to document that here at OpenPaddock.net and to follow the progress of many of the drivers that have come through the Road to Indy, but admittedly, we’re fans and a bit biased. There is objective evidence of the program’s success, and it can be seen in the list of the 33 drivers who will contest the 98th running of the Indianapolis 500 Mile Race. Although the formal program has only been around since 2010, the pieces of the Mazda Road to Indy, USF2000, Pro Mazda (originally Star Mazda), and Indy Lights have all been around for much longer. Two of this year’s drivers have raced in the USF2000 series, four have competed in Pro Mazda, and 18 have turned race laps in Indy Lights. If anyone wonders whether the program works or not, ask over half of this year’s 500 drivers. Here’s the Indy 500 Starting Grid along with the various Road to Indy series in which they’ve competed.

Most of these drivers have only driven in the Indy Lights series, but the person in this year’s 500 Mile Race that exemplifies what the Mazda Road to Indy program was intended to do is Sage Karam. Sage began racing in USF2000 for Andretti Autosport in the year of the series rebirth in 2009 and won that championship. He then moved up to Star Mazda with Andretti Autosport and raced for a couple of seasons, taking some race wins, and finishing high in the championship standings. In 2013, he moved to Schmidt Peterson Motorsport to compete in the Indy Lights series. Having won the championship this year, he was awarded scholarship money to move to a partially fund a full-time ride in IndyCar or to nearly cover a full Indy 500 program. On Saturday, Sage had decent speed, but on Sunday, the car had set-up issues resulting in his qualifying on the back row. During Monday practice, however, it seems that the speed was back. 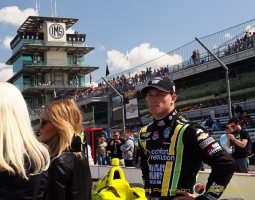 “Things went really well today. Obviously yesterday we just missed something in the setup, and today we made some changes for that and the car was a hell of a lot better. We were really fast today. I was able to run with traffic, run up on guys, and make a lot of passes. Today was a really encouraging day for me and for the team as well because it shows we can get to the front and we can pass anybody. Because of that I’m really looking forward to next Sunday, I think we still have a good shot at this thing.”

This coming Sunday, Sage will become the first driver to have competed at all four levels of INDYCAR, and demonstrate the value of having a clearly defined and well run development ladder. While things aren’t perfect for INDYCAR, especially for the IndyCar Series, other top racing series could certainly learn from the effectiveness of the Road to Indy program.