At least once a year, the Salina Region of the Sports Car Club of America holds a Driving School and Solo Racing event on the huge landing pad for the 1st Infantry Division’s Combat Air Brigade. On Saturday of the two-day event, soldiers and the public are invited to participate in a Solo Novice School in which the students learn the basics of the sport of Solo Racing, vehicle dynamics, and how to identify proper racing lines. Students are paired up with experienced veterans of SCCA Solo Racing, and, while driving their own personal cars, learn how their cars behave when driven at the limit of their performance envelopes and how to control them at that edge of that envelope.

The Sunday afterwards, students join their instructors and other SCCA members in a competitive Solo Racing event where they are able to apply the lessons from Saturday’s school in a true and proper competitive environment. The turnout for the Sunday event was strong, with over 80 drivers pre-registered and several soldiers and new drivers signing up that morning. For me, racing on a large, wide-open pad of thick concrete was a new experience. I’d raced on Heartland Park Topeka’s asphalt, but grip on that asphalt was nothing like what it was on the 1ID Combat Air Brigade’s landing pad.

The vastness of the site did make visualizing the course difficult for many, and most of the first runs in Heat 1 Sunday morning were either very dirty runs (collecting many cone penalties) or complete DNFs for failing to follow the course. As the day went on, the DNFs were fewer and the times began to drop. It finally came time Heat 2 and all of a sudden I was at the line looking out at a sea of cones. The starter gave the “Go!” signal and off I went! …right into the inside cone on the first turn. *sigh* At least I did a good job of looking ahead and following the course, even if I was a bit slow. The second two runs we just won’t discuss. 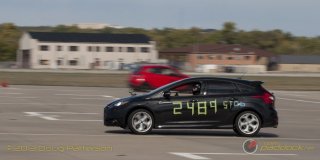 DNFs and some weight reduction by means of a cone. Who really needs a plastic undertray and air deflector anyway, right? The final run of the day was by far the best, but not quite enough to score a class win. Bummer. It was a great time playing on such a large pad and enjoying the company of the Salina Region folks.

Work duties during Heat 3 meant that I was only able to image the pre-race activities and Heat 1. If you were in Heat 1, then I probably have an image of you in the gallery below.