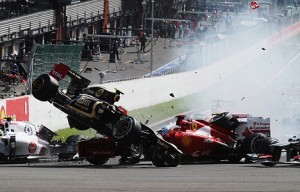 SPA, BELGIUM – SEPTEMBER 02: In this sequence of ten frames Romain Grosjean of France and Lotus is seen being catapulted into the air as he crashes at the first corner at the start of the Belgian Grand Prix at the Circuit of Spa Francorchamps on September 2, 2012 in Spa Francorchamps, Belgium. (Photo by Mark Thompson/Getty Images)

This site uses Akismet to reduce spam. Learn how your comment data is processed.