First of all, let me say, HOLY CRAP WAS THAT A TON OF FUN!!! This past weekend the Kansas City Region of the Sports Car Club of America held its very first rallycross event. It was a new experience for everyone as only five out of the thirty participants had ever rallycrossed before. Most of the competitors were very experienced autocrossers, and there were a few like me who have only scant experience at autocross and none at rallycross. Fortunately, we did have the help of a few knowledgeable and experienced, national-class drivers, including Jan Gerber, who won this year’s Stock AWD class, Jim Rowland, Jon Simmons, Alex Reinkordt, and Jeanie Creech, all of whom competed in this year’s SCCA Rallycross Nationals last weekend in Tulsa, OK. All of these experienced racers were very helpful in constructing the course and monitoring the safety of the course over the day. 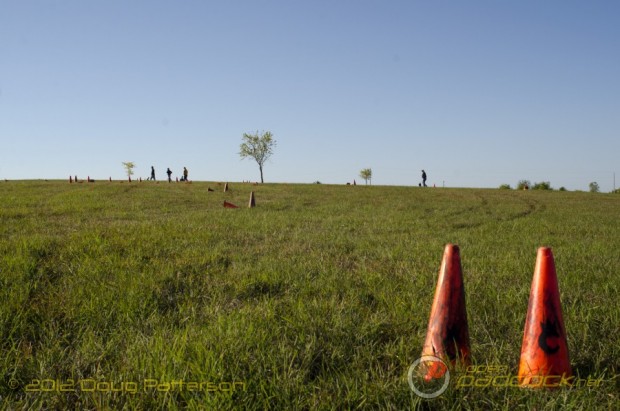 With a small turn-out relative to what we normally would see at a solo event, we each were able to take six runs through the course, giving us a LOT of seat time. This was great news for all of us newbies to the sport. The lessons on the difference between autocross and rallycross began before we ever turned a single wheel on the course. Helping with the course set-up, we learned that many of the traditional autocross elements, especially slaloms, were not utilized and were even frowned upon in rallycross. 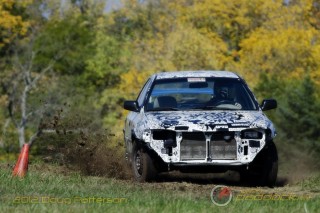 The goal was to create a layout that more closely resembled a proper rally stage in miniature with fast, flowing corners rather than a tight, twisty course with abrupt turns. The initial course we’d set out looked more autocrossish than rallycrossish and alterations were made during the lunch break before the afternoon runs. Since ruts can develop over the course of the event, roll-over is a larger concern in rallycross than it is in autocross, so when trouble spots arose, the course was altered to make sure that we weren’t in a position where our cars were at risk of catching a rut wrong and getting up on two wheels.

I raced my little Ford Focus SES equipped with half-bald all-season tyres, and I slipped and slid my way all over the place. …and had a blast doing it! A good friend of mine, fellow autocrosser, and occasional contributor to OpenPaddock, Tim Steger, joined me for the event. We shared the Focus swapping seats during the first runs of the morning and afternoon sessions, but driving solo on the last two runs of each session. For Tim, this was a definite departure from his normal driving experience. I drive the Focus every day on my commute to work, and I drive it hard on my gravel road. Tim’s weekend toy and occasional daily driver is a Mazda Miata, so there were three things he had to handle all at once, driving a FWD car as opposed to RWD, dealing with the confines of a roof and the changes in visibility that imposes, and learning how to manage driving at speed with minimal if any grip. It was a thrilling experience!

“I loved the loads of difference and similarities between the two types of racing [autocross and rallycross]. In both races, picking the line, car control, and knowing when to hit the brakes are vital. 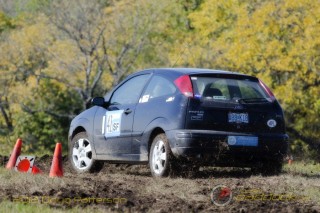 The main differences are the amount of driver inputs. In autocross, minimal inputs make a smooth line, which is fast. In rallycross, it takes lots of input, constant input, to make a car take a smooth line. In both races, I was driving an underpowered car. Power helps, but just maintaining the momentum is most important. Another important difference is that in both types of racing, you have to be able to feel and interpret what your car is telling you. Grip is near constant and almost the same run-to-run in autocross. In rallycross, grip is different every ten feet!” — Tim Steger

Even for me, it was still a different experience from driving on gravel. It felt more like what my Focus is like on snow. Our grip level was virtually non-existent, so getting a good time for us meant building up a ton of momentum as early as we could and keeping as much of it as possible throughout the course. If we lost that momentum, it was over, our times were trash. We didn’t have the power that many of the other cars had, we only had the front two wheels to drive us, and those wheels had tires that were about shot. All that added up to nearly constant wheel-spin throughout the entire run. I’m definitely getting some snow tyres for next season! You can hear in the video below, the struggles my car had finding grip, especially headed uphill.

So Rallycross #1 is in the books, and by all accounts the event went outstandingly well. There were no major glitches in timing and scoring as some had feared, the weather was perfect, and the organization of the event was top-notch! This could be the beginning of something pretty big in the Kansas City Region when the word gets out about how much fun everyone had tearing up poor Lenard’s hay field. Next year, the club is planning on having a couple of rallycross events, one in the Spring and another in the Fall, with the intention of perhaps running a full rallycross season in 2014. If this takes off, I might have to get yet another car!