The last round of the Rally America National Championship is almost here! Next weekend, 78 teams will take to the back roads in the mountains around Olympus, WA. That’s a record turnout for the Rally America Series! All season long, the Rally America events have been recording record entries and seeing record crowds come to enjoy rally racing. It all points to the rising popularity of rally racing and seeing competition between real cars. IndyCar racing is exciting, but the cars are nothing like anything you’d see in the showroom, and NASCAR has driven many away by also moving to race cars that have little connection to the cars people see on the showroom floor. Rally racing, however, is contested by real production cars at various levels of preparation, but always street legal. It’s a form of motorsport that really engages the spectators in a far more direct and involved way than the various circuit racing series, and it’s a form that is accessible by regular folks and not the elite well-to-do like we see in IndyCar or the top level of sports car racing. I believe this is why we’ve seen such fantastic growth for the Rally America series. Fan of the show, and regular rally contributor, Mike Shaw (@oregonwings) will be at the Olympus Rally next week, so be sure to look for some photos and a review of his experiences on the stages. We welcome commentary from all! Afterall, our moto is “Motorsport commentary for the fans, by the fans.” That means you! We’d love to share your motorsport thoughts and experiences with the world.

Williston, VT (September 10, 2012) — The Rally America National Championship season concludes with a bang with this year’s largest assembly of top national and international rally teams at the Olympus Rally on September 22-23rd in Olympia, WA. Over 70 teams will return to the gravel logging roads once used in the 1980’s World Rally Championship located just outside the Washington State capital and will extend into the picturesque Pacific Northwest peninsula. All eyes will be on the much anticipated rematch between Ford, Subaru and Mitsubishi’s top rally drivers. The manufacturers previously met at the Rally in the 100 Acre Wood last February in Salem, MO where Monster World Rally Team’s Ken Block from Park City, UT and Alex Gelsomino from Santa Clarita, CA won the event in their 2012 Ford Fiesta HFHV marginally besting Subaru Rally Team USA’s David Higgins from Trefeglwys, England and Craig Drew from Forest of Dean, England.

“I’m stoked to be back in my Ford Fiesta HFHV racing some rally stages in North America this month,” said Block. “I’m looking forward to getting back to a Rally America race and going up against Higgins and L’Estage once again. Those guys are fast and it’s going to make for some great racing at Olympus.”

The Olympus Rally is Block’s second Rally America event this season and his entry adds a level of flair due in part of his hugely successful Gymkhana videos that helped place rally style racing on the map – not to mention the fact that Block is the only American driver competing in the World Rally Championship. (See Block’s latest video: http://bit.ly/TJPg5N) 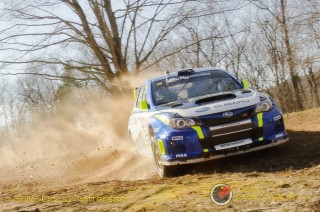 “It’s great to be able to go to event without having to worry about points and looking forward to competing against Ken again,” commented Higgins, “After five weeks with no rain I think dust could be a major problem. I’m hoping for some rain in the coming week, otherwise the luck of the draw will have an even bigger meaning!

Ford and Subaru’s battle will be joined by the Rockstar Energy Drink Rally Team Mitsubishi EVO of Antoine L’Estage from St-Jean-sur-Richlieu, Quebec and longtime co-driver Nathalie Richard from Halifax, Nova Scotia. L’Estage and Richard actually tailed Block when he lead the 100 Acre Wood Rally and looked like the team that could beat Block until L’Estage suffered an untimely transmission failure that passed second place to Subaru.

As the top of the leaderboard duke it out, the Olympus Rally will ultimately decide the winners of the 2012 Super Production (SP) and 2012 Two-Wheel Drive (2WD) National Class Championships as well.

Rally America’s national Super Production class leaders Lauchlin O’Sullivan from San Francisco, CA and Scott Putnam Minneapolis, MN hold the advantage in their Mitsubishi Evolution VIII as they just need to finish the Olympus Rally in order to take the class win. However, the possibility of Rally America’s first real first place tie could become a possibility if second place’s David Sterckx from Los Angeles, CA and co-driver Karen Jankowski from San Marcos, CA win the SP Class in their 2011 Subaru WRX STI and O’Sullivan and Putnam fail to finish – then both teams will share first place, even after tie breaker rules are applied.

In Rally America’s National 2WD Class, Chris Duplessis from Bethlehem, NH with co-driver Alex Kirhurani from Philadelphia, PA are just five points away from winning the 2012 2WD National Championship. In order for Duplessis to capture his third 2WD National Championship, he needs to finish eighth or better which is almost assured considering his impressive finishing record. Right behind Duplessis is Andrew Comrie-Picard from Hermosa Beach, CA along with co-driver Jeremy Wimpey from State College, PA in their 2011 Scion xD rally car for a last chance effort at first place. The team essentially needs six points and Duplessis to not cross the finish line in order to complete the upset.

However, spoilers may come into play with Australia’s Will Orders and Toni Feaver on the entry list in their high-horsepower 1989 Nissan Silvia rear-wheel drive rally car. The Australian team won two national 2WD events this season and are a favorite to win Olympus as well. Their entry could potentially prevent Comrie-Picard and Wimpey from earning the much needed points they’ll need to overcome Duplessis and Kirhurani.

The Olympus Rally will begin on the plaza in front of the Washington capital building in Olympia with a Parc Expose where fans can meet the drivers and co-drivers as well as take pictures of the rally cars on Saturday, September 22nd at the Olympia Capitol grounds at 9am. It’s a great opportunity for fans to interact with their favorite drivers and get a few autographs.

A free spectator guide will be available for download soon at http://www.rally-america.com, which include maps and directions to spectator areas, event schedules and more information.