Editor’s Note: Mike Shaw is a regular visitor to OpenPaddock.net and rally fan. His contributions to our rally coverage began with his articles summarizing the rally action and fan experience from this year’s Oregon Trail Rally, and he continues his contributions here with coverage of the Susquehannock Performance Trail Rally. Be sure to check back regularly throughout the weekend for new articles and give him a follow on Twitter, @oregonwings. 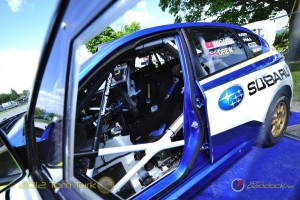 Although the Open class seems all but wrapped up by David Higgins, keep an eye on Antoine L’Estage as he hopes to gain points and prove that he can be a threat for the rest of the season. Also keep an eye on Adam Yeoman who finished 3rd at Oregon Trail and is now 3rd overall in points. Adam seems to have a great combination of natural ability, calm attitude, and a certain amount of bravery to be pretty fast (just watch his YouTube video when he went off at OTR and still kept going).

I think the most exciting this weekend will be the Super Production class where Travis Hanson dominated last year, but this year has significant competition from Lauchlin O’Sullivan who is just one point ahead of him and newcomer to the series Belgian driver David Sterckx who is just 2 points behind. Being Super Production cars means driver talent will likely determine the outcome.

Similarly, the 2WD class will also be very exciting this weekend. Chris Duplessis who missed out on OTR will be back with his newly built Ford Fiesta R2. Chris is coming fresh off a grueling race with the WRC Academy in Greece where he finished 6th in class and scored his first points. One would think STPR should be a cinch by comparison, but not so fast. Andrew Comrie-Picard is leading in points in his factory-backed Scion XD by 7 points after a 2nd place finish at OTR, and the Australians of Will Orders and Ross Allan are back in action with their 400-hp Nissan Silvias. Will Chris Duplessis be able to keep enough speed through the corners to outperform the Australian monsters?

It should be some great action this weekend, follow @Rally_America and #STPR12 on Twitter for up-to-the-minute results! Openpaddock is happy to have photo support of the event courtesy of Tom Turk of Piratical Photography, @Piratical_Turk.