The record-setting large field for the upcoming Sno*Drift Rally, first round of the Rally America National Championship, just got a little bit bigger. David Higgins will return to the series with the Subaru Rally Team USA to defend their 2011 championship title. David Mirra will also be back, but will focus on the RallyCross event due to several schedule conflicts with Mirra’s BMX events. 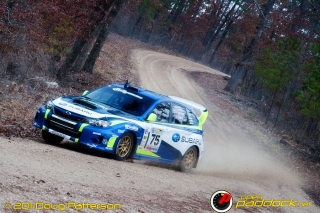 “I’m excited to defend my title with Subaru as we have made some great progress in the development of our STI rally car in the off-season, and so the confidence is high right now. The Rally America championship is a fantastic series with a great mix of events and conditions coupled with a very high level of competition. I expect 2012 to be a big fight but we have the right car and the right team, so I’m really looking forward to it.” — David Higgins, Subaru Rally Team USA

While its unfortunate that Mirra will be unable to compete on a regular basis, it is good to hear that Higgins will return. The talent level in the Rally America National Championship is very high right now, and the competition between Higgins and L’Estage should be really stiff!