In keeping with the Top-Five series of posts, we now turn our attention to the cars. What do you think were the top five most influential race cars throughout motorsports history? We’ve taken a stab as some we think were true game-changers in their time.

Being a life-long fan of the Indianapolis 500 Mile Race, I might be a bit prejudice, but the Lotus 38 that Jimmy Clark drove to victory in 1965 changed how Americans viewed race cars. Prior to the Lotus 38, the cars that ran at Indianapolis were large, front-engined roadsters, and the lithe rear-engine Lotus was laughed at by pretty much everyone in Gasoline Alley. That is until Clark started blowing the doors of the older design cars. After 1965, no front-engine roadster ever again won at Indianapolis. The Lotus 38 brought in a new era of lightweight, rear engine cars that were sleek, sexy, and most importantly FAST! The Ford GT40 is nothing but a revenge car. Henry Ford II and Enzo Ferrari were in negotiations for a Ford buy-out of Ferrari until Enzo bailed on the deal in the very late stages of the process. In anger, Ford went out looking for a partner with which to build a race car capable of besting Ferrari at Le Mans. Lola turned out to be that partner, and the result was the Ford GT40. The GT40 originally debuted at the 1964 Nürburgring 1000 km race where it showed well until a suspension failure put the new car out of commission. Its debut at Le Mans in 1964 was no success, either, as all three entries would eventually retire. Things turned around in 1966 as the car was refined, and Henry Ford II would have his revenge. As it turned out, he would have it over and over as the Ford GT40 won the 1966 24 Hours of LeMans and the next three as well. The Ford GT40 became an icon of American automotive engineering prowess and forced everyone in the world of sportscar racing to step up their game.

Believe it or not, back in the day NASCAR was a series rife with innovation and technology! The other neat thing about NASCAR in its earlier days is that it was actually a STOCK CAR series. In fact, in order for a car to be eligible for competition, manufacturers had to produce a certain number of production cars for retail sale. This means that the car you saw Richard Petty drive to victory lane on Sunday you could go out to your dealer and buy on Monday. What a novel idea!! The car that changed this whole game was the Dodge Charger Daytona. Seeing the advantages of the aerodynamics that were revolutionizing open-wheel racing at the time, manufacturers began to create specialized production vehicles whose sole purpose was to go stock car racing. The Daytona was a special variant of the already successful Dodge Charger, and Dodge went to extremes to gain an advantage. A special front clip was attached to the front of the Charger to give the Daytona variant a elongated and pointed nose rather than the flat aerodynamically hindering traditional front clip. In order to keep the rear of the car planted onto the track, a rear wing was placed on the car as well. Understanding that the wing would be more effective in the clear, less disturbed, air stream above the car, the wing was placed on tall stilts so that it would ride above the roof line. This gave the car a decidedly odd appearance, but it also made the car lightning fast! The Daytona won in its first race at the Talladega Speedway in 1969, and the Plymouth version, the Superbird, won in 1970. After the domination of the Daytonas and the Superbirds, rules were changed and NASCAR slowly moved away from production-based cars toward the template cars we see today. Is there anything in rally racing that says “domination” better than the Audi Quattro? The Quattro concept revolutionized both the automotive industry and rally competition forever. The first Audi Quattro was released in 1980 and was in rally competition by 1983. The Quattro was the first car to utilize both an full-time 4WD system along with a turbo-charged engine, thus was the first rally car to employ the platform we’re familiar with today. The combination of the grip level of the 4WD system and the power of a turbo-charged engine gave the revolutionary Audi a huge advantage over the rest of the competition and it immediately started winning stages and rally events. Audi would eventually win the WRC manufacture’s Group B championship in 1983 and 1985, while winning the drivers championship in 1984. By 1986, the rest of the field had caught up to the Audis and although the Quattro platform was still a contender, it was no longer the dominant car that it had been in the early 80s. Never forget, however, that it was Audi that showed the way and took a gamble on a 4WD car that other manufacturers thought would be too complex to be reliable enough for the rigors of rally racing. How wrong they were! Perhaps no single innovation revolutionized autosport more than Dan Gurney’s wickerbill, also known as a “Gurney flap”. In order to improve the performance of his winged Eagles, Dan Gurney placed a small vertical tab at the trailing edge of the wing, protruding upwards on the high-pressure side of the wing. The result of this tab was to increase the pressure on the top of the wing while enabling the air stream to remain laminar all the way to the end of the wing cord on the low-pressure side thus producing more downforce. The device was first tested by Bobby Unser in 1971 at Phoenix International Raceway on a Gurney Eagle built for American open-wheel competition and the Indianapolis 500 Mile Race. Bobby Unser would qualify the Eagle with its new flap on the front row at Indianapolis that year, but would spin out from the lead. The Eagle would eventually realize ultimate victory at Indianapolis in 1973 and 1975, but by then the genie was out of the bottle, and other teams and manufacturers in IndyCar racing and in other forms of motorsport finally figured out the proper use and function on Dan Gurney’s design. Now the Gurney flap is ubiquitous in almost all forms of motorsport and in many areas of aircraft engineering. 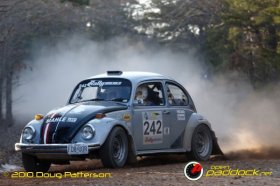 Of course, these picks are a matter of opinion and debate. I’ve had my say as to what the top five are, but there are certainly other cars worthy of mention. Two that came close to making the top five were the VW Beetle and the Porsche 917. The VW Beetle really turned into a desert and rally racer for the masses. Lightweight, and cheap and easy to maintain and modify, it was a perfect platform for the people with modest means to go racing. In fact, we still see the Beetle in competition in the Baja races and in many rally competitions including the Rally America Series. The Porsche 917 was the answer to the domination of the Ford GT40 and revolutionized the prototype sportscar scene. The reason why I didn’t put the 917 in the top five is that it was a response to the Ford.

So there are my selections for the top five most influential race cars in motorsports. Agree? Disagree? Which cars would you have placed in your top five?