This weekend represents the home opener for the IZOD IndyCar Series, and the first race of the season for the Firestone Indy Lights and US F2000 National Championship, on the Streets of St. Petersburg. The IZOD IndyCar Series began the 2010 season the weekend before last on the Streets of Sao Paulo, Brazil, but this weekend represents the series first race of the year on US soil. Historically, the St. Petersburg race has one of the best races of the season, which is a bit surprising given that its a street course. The long wide front stretch bracketed by wide, multi-line corners allow for a lot of action to develop directly in front of the fans. The best news of all for this season is that this race will be the first to be aired on DirecTV since dispute between DirecTV and Versus. A super-majority of us here at OpenPaddock are very enthusiastic about the return of Versus to our channel lineups.

The Indy Racing League has only been racing in St. Petersburg since 2005, with Dan Wheldon winning that inaugural event during his championship winning season with Andretti Green Racing. The most successful IndyCar driver at in the short history of the event has been Helio Castroneves, having won both in 2006 and 2007. In 2008, after the unification of the two major open-wheel series, the IRL and CCWS, Graham Rahal became the youngest winning driver in the history of major American open-wheel racing in the very first race he entered in the IndyCar Series. Last year Dario Franchitti wins in his second race back in an open-wheel car since his championship run of 2007, his first race with his new team Target Chip Ganassi Racing was at Surfers Paradise. Of course DW would have us believe that Dario’s victory and subsequent championship was solely the result of his time spent driving stock cars in 2008. …whatever, DW. 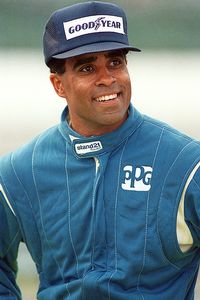 Although the IndyCar Series has only been to St. Pete since 2005, the city has a very long history of hosting motorsports events dating all the way back to 1985 when the SCCA Trans-Am series raced along the same waterfront, although on a slightly different course layout, as the modern IndyCar series race. The first winner at St. Pete during the Trans-Am era was none other than Willy T. Ribbs, first African-American to qualify for the Indianapolis 500 Mile Race. Ribbs went on to win Rookie of the Year honors that year in the Trans-Am series. Racing didn’t return to the waterfront until 2003 when the CCWS modified the old Trans-Am course into its current configuration. Paul Tracy one that one and only CCWS race. Andretti Green Promotions, now Green Savoree Toronto, ULC, took over the event, and secured a deal with the Indy Racing League to have the IndyCar Series run its first ever non-oval event. Since 2005, the event has been a great success and Andretti Green Promotions have negotiated a contract extension with the City of St. Petersburg ensuring the event’s presence on the IndyCar schedule through 2013. We presume that this agreement was passed onto the new Green Savoree Toronto.

The Honda Grand Prix of St. Petersburg is run on the streets along the waterfront district around a course slightly modified from the old Trans-Am circuit. The modern course was extended to make use of the airport runway as the front stretch and pit lane. Since its a street circuit, the racing surface is more uneven than on a permanent road course or a speedway. Thankfully, St. Pete is no where near as bumpy as the Sao Paulo circuit turned out, but its still not going to be a smooth ride. This means that the ride heights must be higher than normal, reducing the ability for the car to provide downforce. Without as much aerodynamic grip, mechanical grip and good car setup are keys to being quick. Unlike many street courses, the St. Petersburg circuit offers longer straights and better passing zones than most, with the prime opportunity for overtaking being Turn 1 at the end of the long front stretch. Look for drivers to take different lines through the final turn on the circuit in order to gain advantage down the stretch and into the first turn. In the last two years, we’ve seen a LOT of action on the first and last corners.

(if player doesn’t appear, go directly to the Versus Virtual Lap site)